You are just over 33 weeks along now– the size of a pineapple! And boy, are you making sure I know it. In my last letter I said that I’m rapidly approaching the point where I’m going to be uncomfortable and exhausted regardless…. yeah. We’re definitely there now. LOL. I keep telling Dad “I swear I don’t remember being this uncomfortable with with the other pregnancies,” to which he responds “Well you said that last time too.” 😉 I’m not sleeping well as it’s hard to be comfortable in any position, everywhere hurts, you move a lot and no area is safe from your jabs/kicks (which are getting MUCH stronger), and I am having a LOT more practice contractions than I remember having with either of your brothers. I suppose being pregnant while chasing around 2 toddlers has something to do with it! 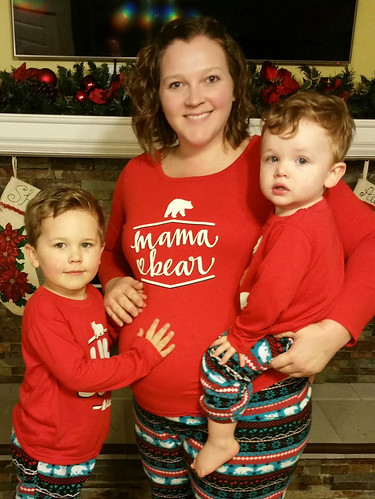 That was taken right at 27 weeks, when 3rd trimester officially began. As I mentioned in your last letter, Alex is still incredibly excited to meet you. Charlie still doesn’t get it, but I’m getting so big now that he’s starting to sense something is going on. He keeps pointing to my stomach and saying “Ball!” (balls are his favorite toys, heaven forbid I might be hiding one under my shirt… hahaha). I’ve been correcting him, but I doubt he’ll understand until you’re here. Anywho, we had a lovely Christmas and everyone was spoiled rotten… including you! 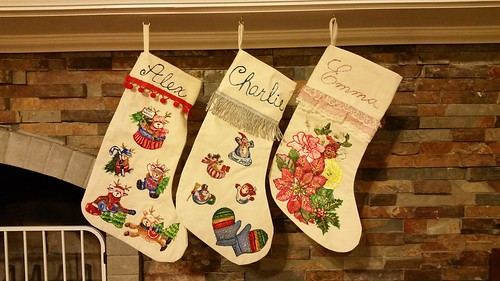 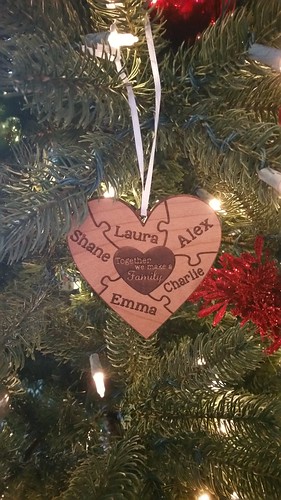 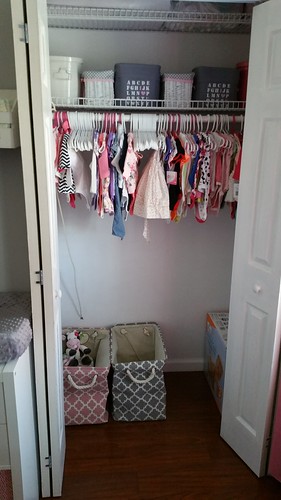 Yes, your closet is already FULL OF CLOTHES and I think you’re pretty much set through size 12 months, at least. Having a girl is definitely bad for my (and Grandma + Nana’s) wallet, as there is just soooooo much cute girly stuff out there. You also have accumulated a few girly baby toys (plus of course we have lots of baby toys already to be passed down from your brothers), various other girly baby accessories (the bows! the shoes! the pink pacifiers & bottles!), and naturally we’re stocking up on diapers as well. I know better than to stock up on much formula since we won’t know what kind you tolerate best until you’re here drinking it. 😉 Nana & Grump got your car seat for Christmas as well. So, at this point we’re as ready for you as we’ll ever be. But it’s still a bit early, so even though I’m incredibly uncomfortable, I hope you stay put for awhile longer! We have your c-section officially scheduled for the morning of March 9, so if all goes well that will be your birthday. Woohoo!

Speaking of being ready for you…. as promised, here are some pictures of your finished nursery: 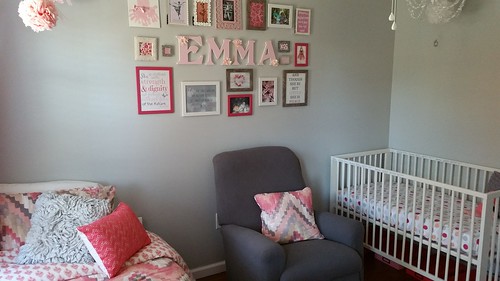 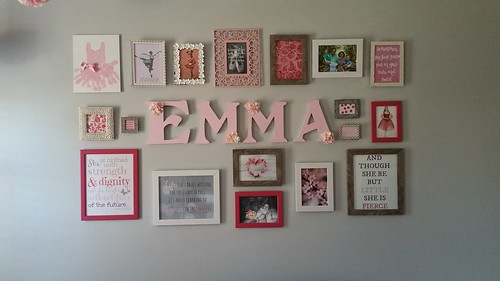 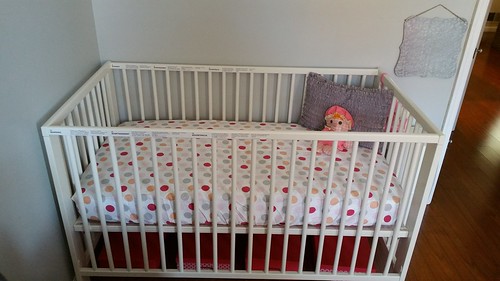 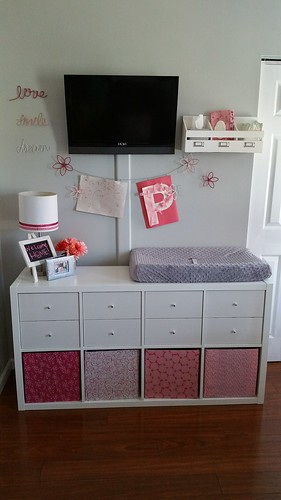 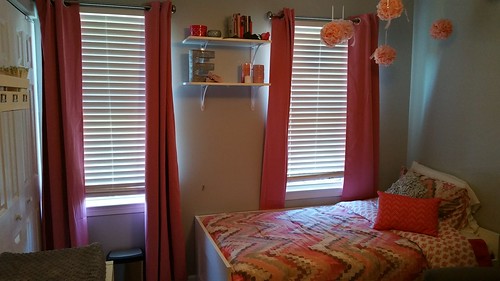 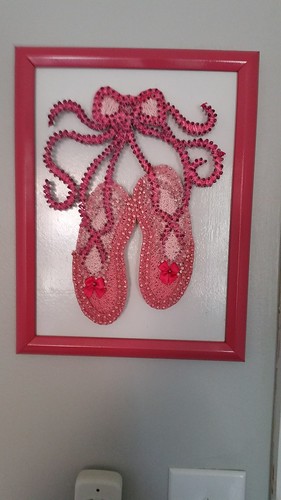 SO. MUCH. PINK. I might be a little excited about having a girl, eh? 😉 I know, I know… it’s 2017 and all, but pink is my favorite color so I just couldn’t resist. The room is kind of ballet-themed as you can see, and most of the quotes on the collage wall are dance-related.

Now it’s just a matter of trying to relax as much as possible these next 7 weeks. And trying not to fall, which unfortunately I did manage to do not long after my last letter. :-\ Tripped over an umbrella on the front porch and although I felt fine (landed on my side), the OB sent me to the hospital to be monitored as a precaution. All looked fine, but you were measuring a bit small so I followed up with the maternal fetal specialist a couple weeks later to confirm that you are growing properly. Which you are, of course: 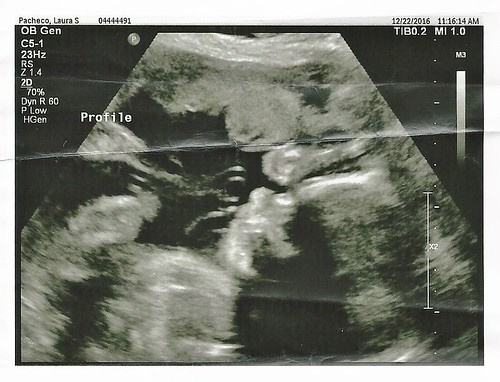 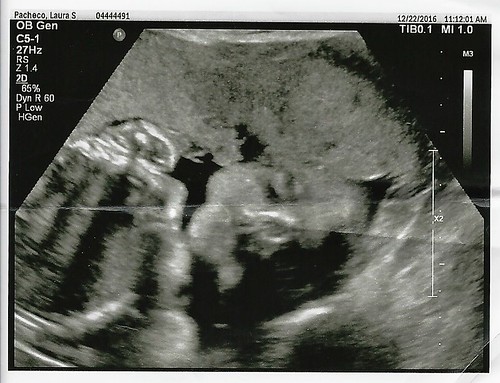 I mean, how the heck could I be getting SO EFFING BIG if you were not growing like a weed in there? 😉 But it’s better to be safe than sorry, and I’m glad we got to go to the specialist because they have much nicer ultrasound machines there. I got to see you in much more detail, and they basically did another full anatomy scan. It’s still hard to say who you look like, as those definitely look like my chipmunk cheeks! Because of my history of preeclampsia, the specialist wants me to come back for one more look in early February. I’m glad I’ll get to see you one more time before we meet face to face.

It’s hard to believe we’ll officially be a family of 5 in just a few weeks! Although I occasionally feel a little nervous about the logistics and finances of handling three young children, overall I’m just so incredibly excited. And VERY ready to be done with pregnancies for good. 😉 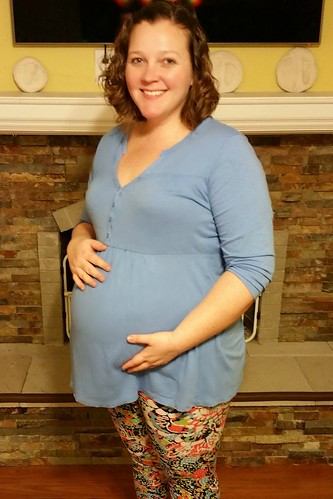 Although of course I’m very thankful to have been blessed with three healthy pregnancies/babies. I say to Dad all the time– “How did we get so lucky?!” 😀 Well, I suppose that’s all for now… I may write once more before your birth, but you can see by now how that goes. Until next time, sweet Emma Jean!