23 weeks! When I last wrote you we were just coming out of first trimester, and here we are on the brink of wrapping up the second. You’re as big as an eggplant now! So much has happened in the last 10 weeks, but at the same time it’s been relatively smooth as far as pregnancies go. I still get waves of nausea from time to time, but they are thankfully few and far between (mostly if I let myself get too hungry). The “venous lake” which was of concern when I last wrote was fully resolved within a couple of months, and your 20 week anatomy scan went without incident…. except it took 3 separate visits for the tech to get pictures of all your body parts because you were so stubborn! So we were actually given the all-clear earlier this week. Here are a couple of my favorite ultrasound shots: 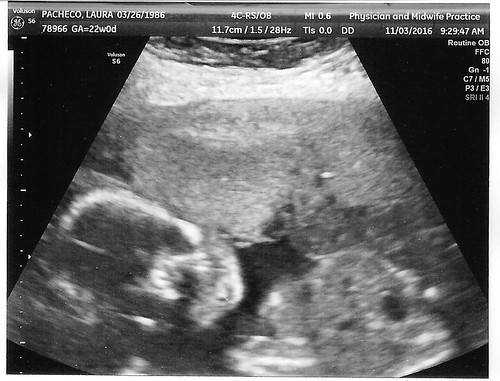 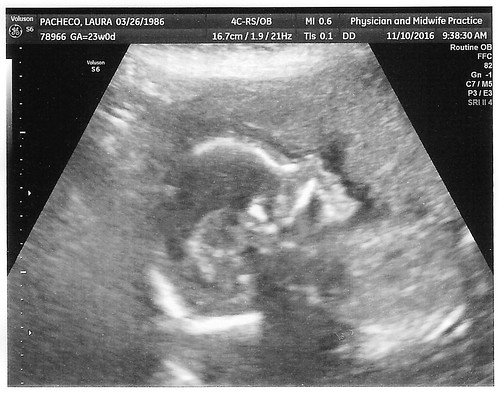 This side-profile shot was the one holdout that it took us three tries to get! Thankfully we were eventually able to confirm that you do, indeed, have a nose. 😉 If I had to guess based on ultrasounds so far, I think you’re going to look more like Alex (and therefore Dad). Time will tell, of course!

The only other thing worth noting is that is took me a bit longer to start feeling your movements, because I have an “anterior placenta” (my placenta is in front instead of the back of my uterus). This past week or so, though, you’ve been off to the races! I feel you move throughout the day now. At this last ultrasound a couple days ago, you even kicked the wand in protest. You are one feisty and stubborn gal! I guess the apple truly does not fall far from the tree.

I’m still tired all the time, but luckily I’m close to the point where I’ll be working from home the rest of the pregnancy…. which is a HUGE help. What hasn’t helped lately is all the illness we’ve been passing back & forth around our house. Being sick while pregnant (and unable to take many meds) is the pits. With two germ-factory toddlers in the house, I think I’m in for a long cold/flu season. But that’s okay. Thank goodness for grandparents! I’m rapidly approaching that point where I’m going to be uncomfortable and exhausted regardless, as you’re growing like a weed in there now… 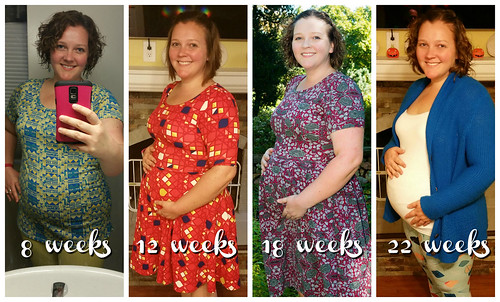 Alas, I’m not as on the ball with taking bump pictures this go-round (and just not on the ball in general, as you’ve probably guessed due to my infrequent letters). But be assured that we are thinking of you and planning for arrival every day! 🙂 Your nursery has actually been done for quite awhile now, but I haven’t taken any nice pictures of it yet because I’m still slowly working on getting all your clothes put away (between myself and the grandmothers, I’ve accumulated quite a bit already– you’ll be one well-dressed little lady!). I’ll try to take some good pictures in time for your next letter. Here’s a preview though– it’s dance-themed with LOTS of pink. 🙂 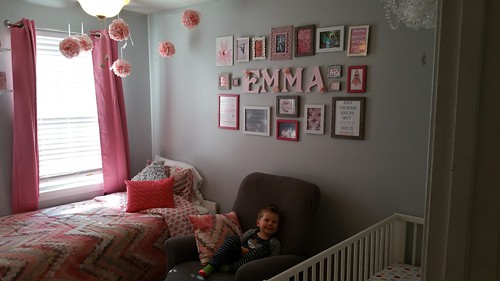 As you can see, Alex is my little helper and is already a fantastic big brother for you– he helped me pick out things for your nursery, and is always asking me to buy you various clothes, toys, etc. at the store. He talks to you in my tummy and gives you plenty of hugs + kisses. Apparently at school, Alex’s teachers and classmates know all about his baby sister but none of them have any idea that he has a younger brother also (until I happen to mention it!). Charlie is still pretty clueless, as evidenced below… I do think he is starting to at least understand what babies ARE, which is a start! 😉 I’ll be very interested to see Charlie’s reaction to you when the time comes.

I suppose that is pretty much it for now…. we are incredibly thankful that things have been more or less uneventful and that we feel as “ready” for you as we’ll ever be. That’s the benefit of being the third baby, I suppose! Dad & I are old hats at this now… and when I say that I don’t mean that we’re experts in anything, but that we know well enough to not worry about things so much and just have faith in the process. 😉 Being a parent is all about keeping your mind open and your heart full, the latter of which is pretty easy to do with our three little blessings! ❤ Until next time, sweet Emma Jean. We love you so very much already!