You’re coming up on 13 weeks along now, and we’re almost out of the first trimester! Before I go any further, I’m happy to report that the second ultrasound to follow-up on your heartbeat went really well. You were a perfectly normal little blob and we could see the little flickering of your heart just fine. 🙂 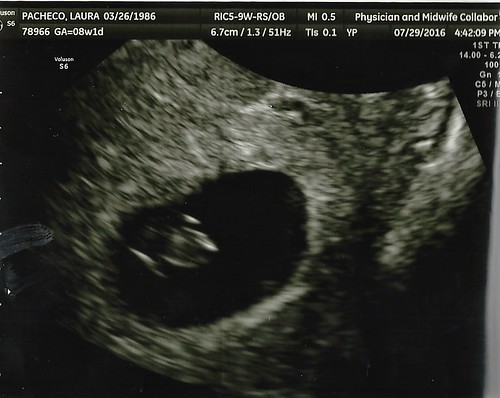 That time I had Dad & Alex go with me, and they were both so excited to get their first glimpse of you! Alex especially, although at first he thought there were three babies because they gave us three pictures to take home. LOL. He also asked where your eyes were. I explained that right now you are still a seed growing in my tummy, and won’t be a full grown baby with all your body parts until you’re ready to be born. He seemed okay with that answer (for now!). 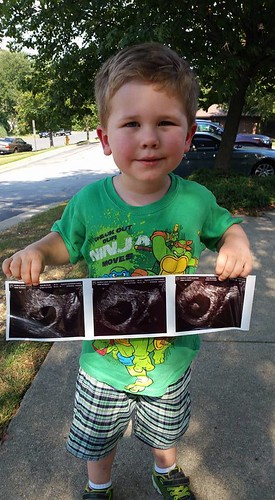 By the time the date of that second ultrasound came around, honestly I wasn’t too worried about the pregnancy because…. I was SO. VERY. SICK. They call it morning sickness, but for me it was all-day-long sickness. I started to come down with that right after the first ultrasound appointment, around 6-7 weeks along, and thankfully the worst of it lasted just over a month. It took me quite by surprise, as I experienced little to no morning sickness with my first two pregnancies. But this time, there wasn’t much I wanted to eat (or could hold down), and many other sensations like most smells, heat, too much motion, eating too much or not enough, etc. caused me to get sick as well. One night right after this started, Dad was kind of enough to make chicken teriyaki for dinner while I was staying late at work… only to have me start yelling “GET THAT SHIT OUT OF THE HOUSE!” while running to the bathroom moments after walking in the front door. :-X Sorry, Dad! Anyway, the only thing that really helped me was sucking on peppermints and taking vitamin B6 (who knew?). Although the situation is much better now, actually I still get waves of nausea from time to time, but only if I let myself get too hungry.

The only other major symptom I’ve been dealing with is extreme fatigue…. straight up exhaustion really, almost constantly. Pregnancy + mothering two young toddlers would do this to anyone, I think. I sleep as much as I can and try to function as best I can, but have admittedly been a very lazy parent this summer. Not many homecooked meals, not many fun family outings, and too much TV for sure. But I’m sure your brothers will forgive me someday!

At my 10 weeks checkup, they took my blood for the DNA test where they look for issues/anomalies in your DNA that might be cause for concern. They did not find any, but they did find out whether you are a boy or girl…. 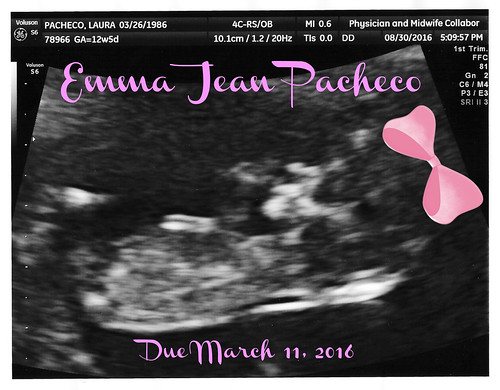 OH. MY. GOD. Not gonna lie, the main reason we decided to have one more was in the hopes of having a girl. We (mostly I) thought that I would regret not trying one more time and would always wonder what my daughter would be like if I did not. And I did do many of the old wives’ tales that you hear about with regards to conceiving a girl– timing, calcium intake, etc. etc. And with the huge difference in my pregnancy symptoms, I thought there was a good chance that I had a little girl growing in there…. but doubt continued to flicker in the back of my mind, and when I got those test results I honestly was expecting to read “boy.”

But man, I’ve never been so happy to be wrong! Not because I wouldn’t have loved another boy (we did have a name and nursery theme already picked out for either scenario, along with fantasies about dominating 1/3 of a baseball team, LOL)… but now I will not have to wonder what having a daughter would be like. We have YOU, Little Miss Emma! 🙂

As you can see above, we just had another ultrasound today to check nuchal translucency (an indicator of Down’s syndrome)– although the NT piece of it looked normal, the tech noticed what is called a “venous lake,” which on the ultrasound just looks like a dark spot on the placenta. The midwife told us later that it could just be old blood, or maybe a cyst, and that it should resolve on its own. In the meantime, I keep going back for ultrasounds every two weeks until it resolves. She assured me that it’s not a cause for concern at all, just something to keep an eye on. For now, I’m not too worried. I have a lot of trust and faith in God, as well as our doctors.

So I decided it would be fun to tell the boys your big news in a fun way (well really just Alex, as Charlie understands none of this yet), so we did one of those balloon gender reveals for them. Alex is so excited and says he loves you already! He talks to you in my tummy all the time. I know he’s going to be an awesome big brother, and I think Charlie will too once he figures out what is going on. 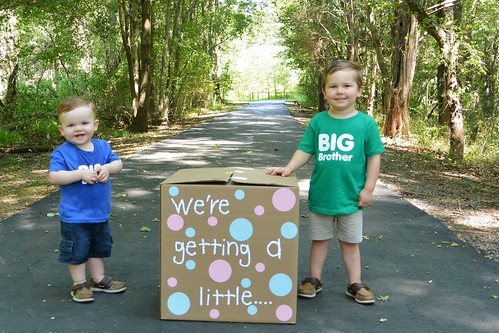 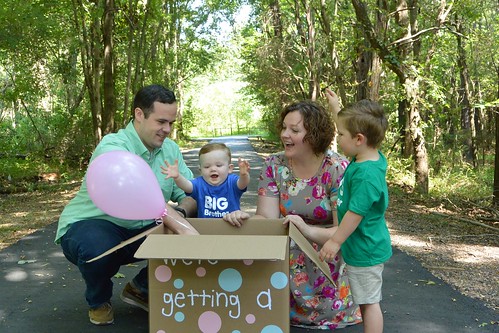 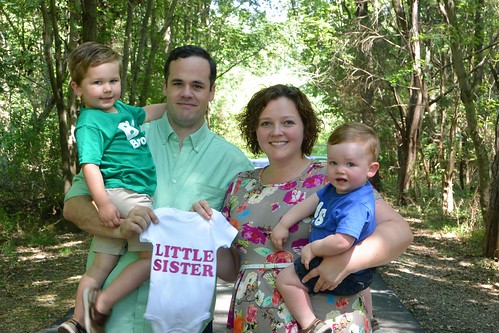 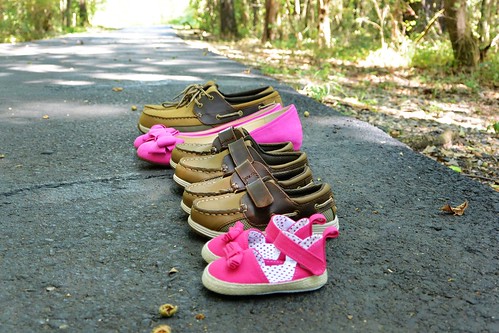 In the meantime, we’ll keep watching our little baby girl seed grow… preparing and anxiously awaiting your arrival! You are so loved already. It feels like the final piece of our family is finally settling into place. 🙂