WOW, how quickly the last 6 months have flown by! I’m sorry it’s been so long since I wrote you last– things have been crazy around here. I don’t want to waste space in this letter on that though, so I’ll just direct you to Charlie’s latest letter here on why finding the time & energy to write letters has been tough for me lately. You went through an especially rough period where you were not sleeping much at ALL. Seriously, averaging maybe 5-6 hours of sleep per night when you’re supposed to be getting a good 10-12. We tried all sorts of things, and it even got to the point where you pediatrician suggested sending you in for a sleep study, when finally three months later I tried removing the night light next to your bed…. and that did the trick! I couldn’t believe such a simple thing was the problem. And maybe it was a coincidence, but I didn’t care. As long as we were all getting sleep again, that’s what mattered. So, things are better now! Spring is here and hopefully that means we’ll all be healthy for more than five seconds at a time. 😉 Anyway, enough about that…

You are THREE! Before I started writing this, I read the last letter I wrote you to get an idea of how much has changed since then. The answer? A LOT! The headliner being that you are potty trained! 😀 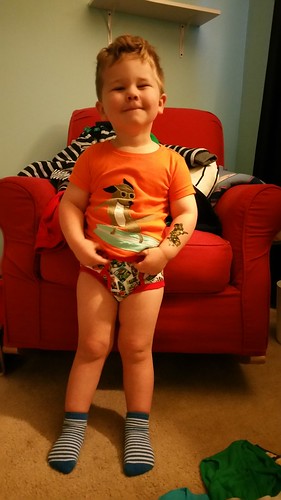 One day in November you just decided you wanted to wear underwear, and that was that. The first few days you had maybe 5 or 6 accidents, and then you were off to the races. We had a brief regression in January (for reasons unknown), but other than that you’ve been day time potty trained ever since. Woohoo! I’m not too worried about night training at this point– you’ve been sick a lot this winter so we’ve allowed you to keep a bottle of honeyed water with you at night to help coughing/sore throat/etc., and honestly I don’t see the point in attempting to night train until we can take that away and you wake up consistently dry in the mornings.

The other big (and very recent) change is that you started preschool about a month ago! 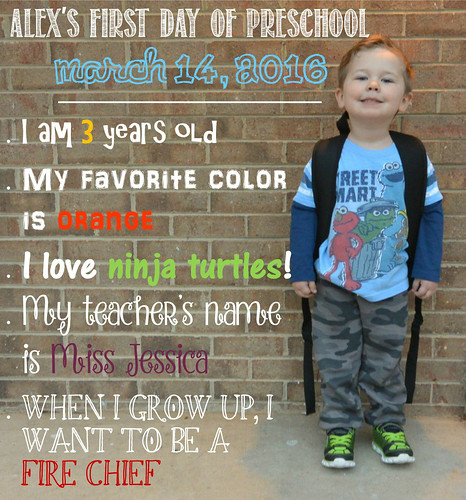 Dad & I had been debating for quite awhile on when or if we wanted you to start preschool… you had a lot of big changes in your life last year with becoming a big brother and all, so we didn’t want to force much else on you at the time. But now that we’re all settled into life as a family of four, and you were showing signs of being ready for the challenge, we decided the time was right. You are amazingly smart for your age– I know I’ve said this many times but it really is true– and so we really think preschool is a better fit for you now. You know all your ABC’s, both upper and lower case, and know how many of the letters sound. You know how to spell and write your name, and can recognize the names of all four of your family members on sight. You know numbers up to 20 as well, as well as shapes, colors etc. (that’s nothing new actually). You know lots of other things too, and are a quick learner. Your most recent obsession is art– you LOVE to draw, color and paint. And honestly you’re pretty good, although all you really like to color or draw is Ninja Turtles (Sesame Street is old news, you’ve moved on to Paw Patrol and Ninja Turtles now ;-).

So although you were more than ready academically, emotionally the transition has been a challenge for you. The first day was great– you went in and started playing without any tears… but I think that’s because you didn’t realize I’d be leaving. Every day for the next few weeks after that, you’ve cried at the mere mention of school, saying that “it’s scary!” 😦 Honestly I was expecting this because you can be a very shy kid and have had some issues with social anxiety, so going into a new & unfamiliar situation with no one you know has been tough for you. But it’s getting better! Your teachers have all been really sweet and understanding. The last couple of days you haven’t cried, and I think the day will come soon enough when you actually look forward to going to school.

All in all though– some really big changes! You are all boy now, the baby days are far behind you. Sometimes that makes me feel a little sad, but overall I’m extremely happy and proud of the little boy you’ve grown into. We have so much fun together. You have the sweetest personality– very thoughtful, caring, and funny. You love to make people smile & laugh. And no matter how big you get, you’ll always be my snuggle bunny! 🙂

And with that, I think I’ll let the pictures and videos tell the rest of the story…

[NOTE: I started this on April 10, but never got a chance to come back and add more pics/videos. Mom fail! I’ll put those in my next letter.]

All in all, it’s been an awesome and eventful year for you. It never ceases to amaze me how quickly time flies as a parent. I love putting together these recap videos of the year because SO MUCH changes in a year when you have little ones. There are lots of ups and downs, but I would not trade a second of it. You have no idea how blessed I feel to be your mom. 🙂