9 months old now… I can’t believe your first year is already drawing to a close! It’s been a busy month, especially for you. This month you have focused a lot on learning to crawl. You’re actually not 100% there yet, but you’re really close! As I mentioned last month, for the longest time you were only able to scoot yourself backwards. In the last couple of weeks you finally succeeded in scooting yourself forward via a sort of “Army crawl” and that is primarily how you’ve been getting around recently. Just in the last day or two though, you’ve started consistently getting up on all fours and doing that characteristic rocking motion that precedes crawling. Even just with the Army crawling though, you’re ALL over the place! I feel like I need to grow a few more arms to keep both you and Alex from getting into mischief. Just last night, after bath time I let you crawl around in your PJ’s while I got Alex into his PJ’s… in less than a minute you’d knocked over your humidifier, then snuck up and grabbed Alex’s pajama pants (which I hadn’t put on yet) with one hand while swiping at Alex’s bottom with your other hand, which resulted in your hand getting diaper cream on it. Oy! LOL.

You have your 9 month doctor’s appointment next week, and although you’re behind where Alex was at this age I’m not too concerned just yet. We’ll see what the doctor says of course, but honestly I think it’s just part of second-child syndrome in that we don’t have the kind of time to work with you 1-on-1 like we did with Alex (so sorry about that!) and there’s always so much chaos going on around here that you’re pretty content to just observe. You’re still a VERY happy baby, and you are gradually progressing with your milestones, so I think you just have a laid-back personality & are fine with the way things are for now. Growth-wise, I expect you’ll be in the highest percentiles again as you’re starting to bust out of even size 12 month clothes! I had all of Alex’s stuff through size 12M stored in your closet, but had to go up in the attic for the first time in quite awhile to get the 18M stuff. I can’t believe how quickly you’re growing!

Still no teeth yet– one has poked through a bit on the bottom, but has just barely pierced the surface & it’s been that way for over a month now. We had some rough teething nights for a couple weeks while that was going on… but thankfully it was nothing that a bit of pain medication couldn’t help with. Your lack of teeth has not held you back from eating solid foods though. You’ve had everything from bananas to broccoli to meatballs (appropriately cooked and cut of course), and you’re a very enthusiastic eater. Most of the time you gobble it all up and cry for more! You’re also getting pretty good at drinking from straw sippy cups… in the last month you’ve gone from just managing a few sips to drinking an entire 8oz of formula out of them, which is helpful when we’re out & about. Admittedly, I’m looking forward to being done with bottles!

I have to watch you and your brother closely at mealtimes though– sometimes he tries to slip you things that you can’t have yet. Just last night, you guys were finishing up your respective dinners while I was at the sink washing dishes when I hear Alex say “Charlie’s eating a carrot!” I had given him some raw baby carrots to eat, and he’d managed to slip a small piece of carrot over to you & it was in your mouth– yikes! Major choking hazard! Luckily Dad was able to smooth talk you into a big open-mouth grin while I held you facing downward, and he retrieved the deviant carrot. We had (another) talk with Alex about how you can’t have his food, but I think it’s more confusing to him now that you eat so many of the same things– including carrots, but of course I serve them to you steamed. Sigh. Lesson learned.

Other than all that it’s just life as usual around here. We’ve been enjoying the beautiful fall weather and all the fun fall/Halloween activities this area has to offer. Here’s some of my favorite pictures & videos from the past month: 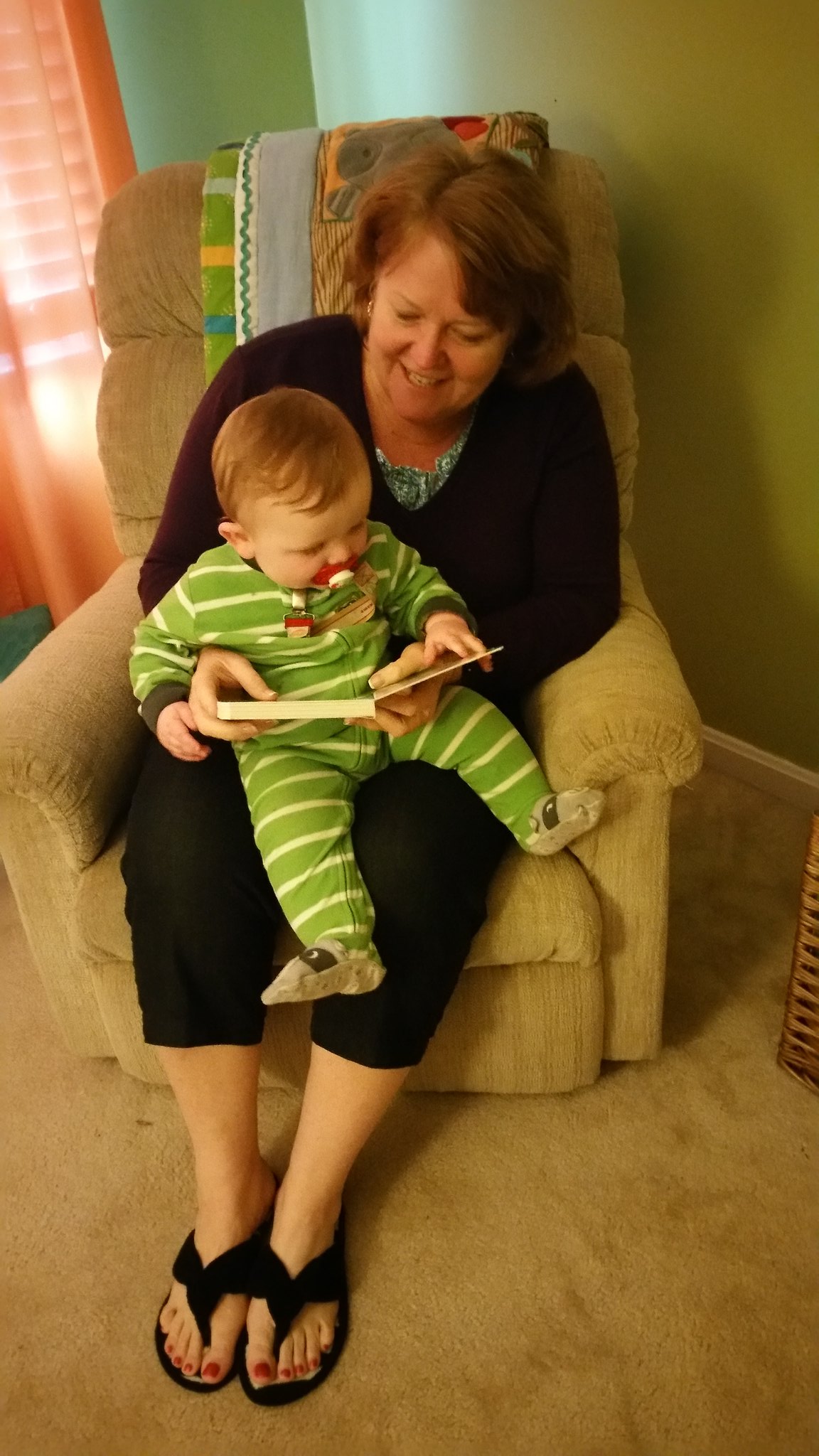 Reading with Grandma– we had a surprise grandparent visit a couple weeks ago! 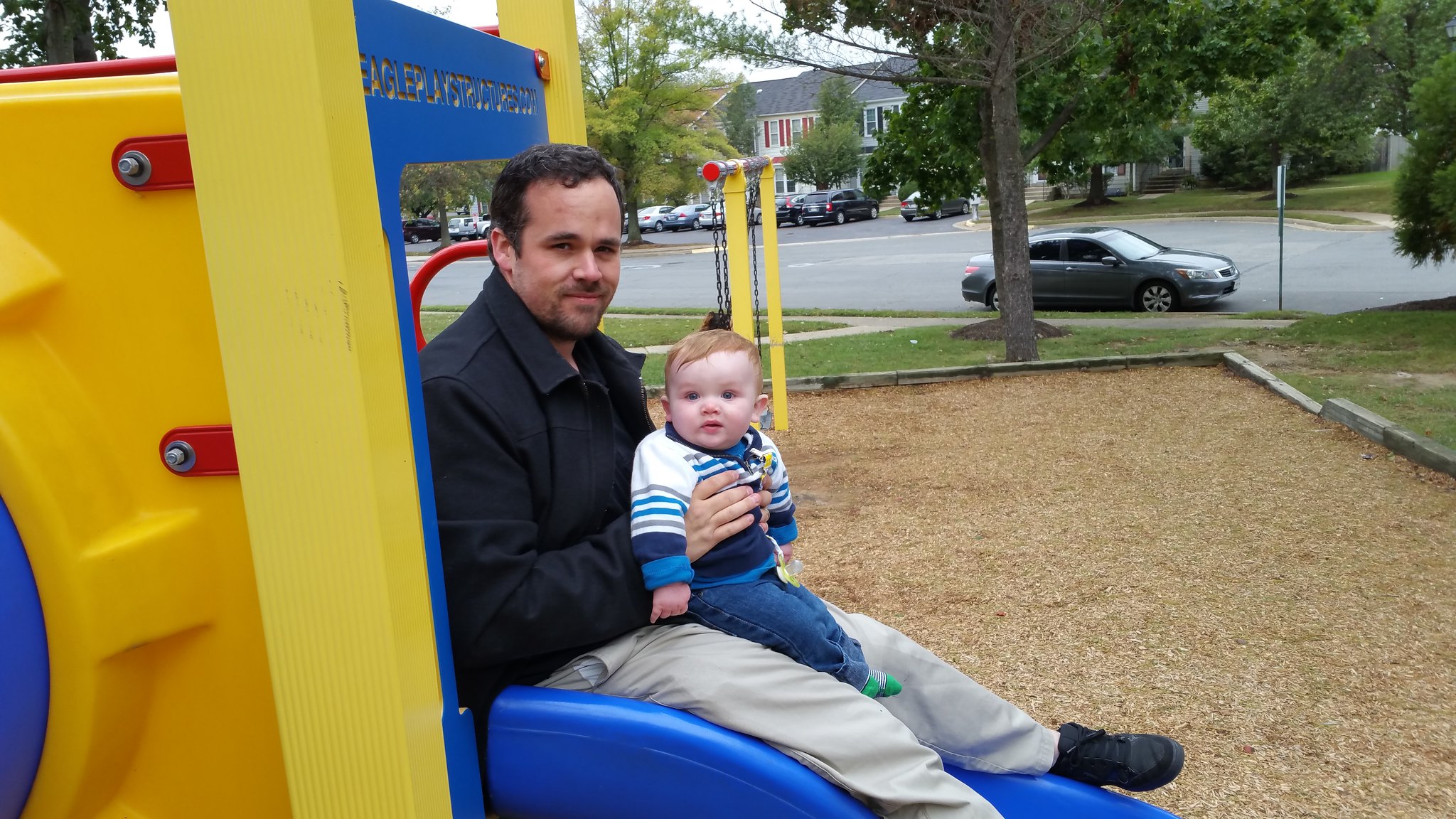 Going down the slide with Dad! Your face cracks me up here– you’re like WHAT the heck are we doing?!

That same day Alex decided he wanted to push you in the swing for the first time. He’s done it many times since & is getting the hang of it! 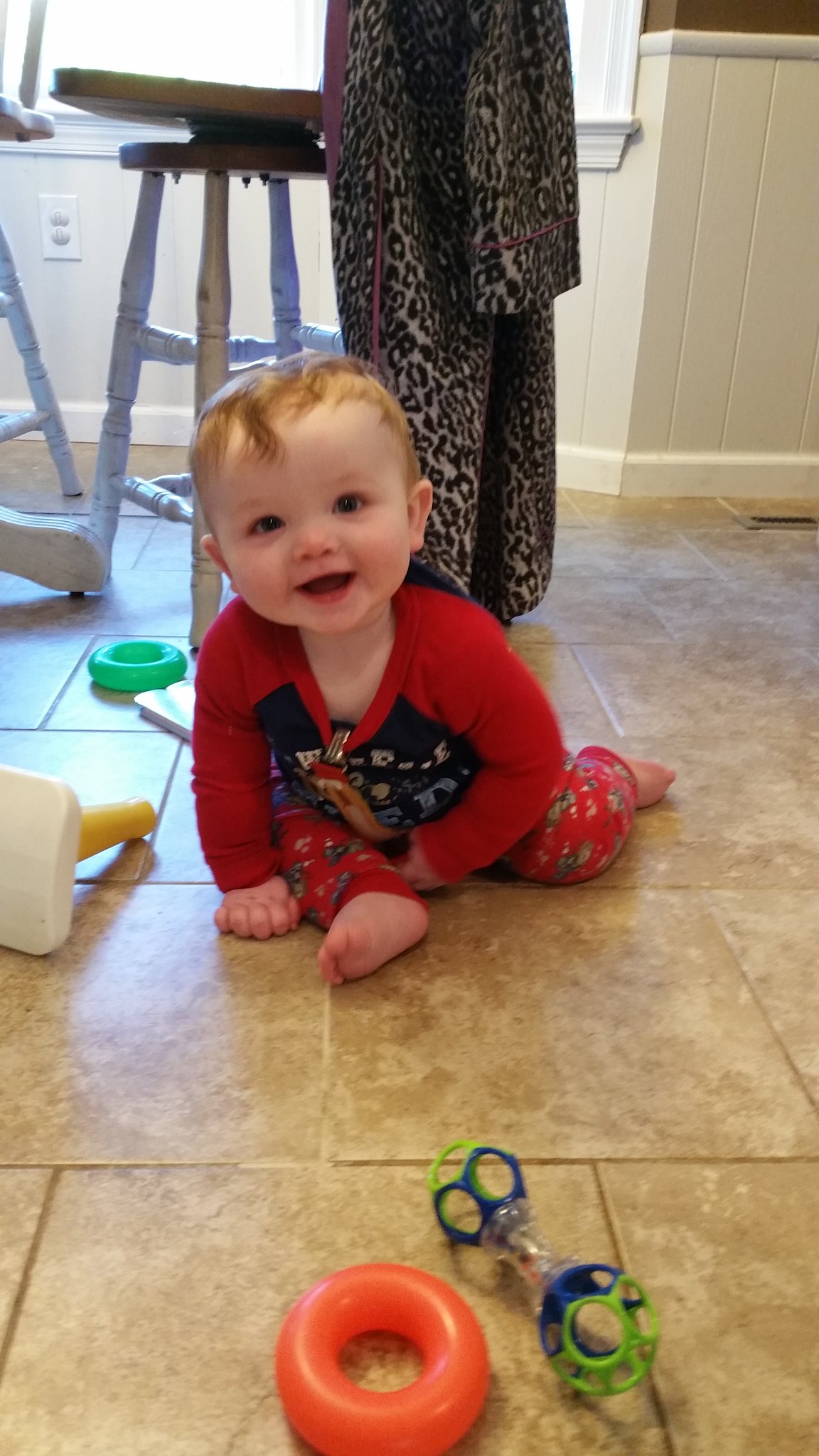 More often than not, while I’m cooking or doing dishes in the kitchen I let you sit on the floor nearby and play with toys. This has helped me discover just how dirty my kitchen floor is… particularly on a day you were wearing black sweatpants and had learned to crawl well enough to find the more obscure corners of the kitchen. :-\ But you love hanging out in the kitchen with me… 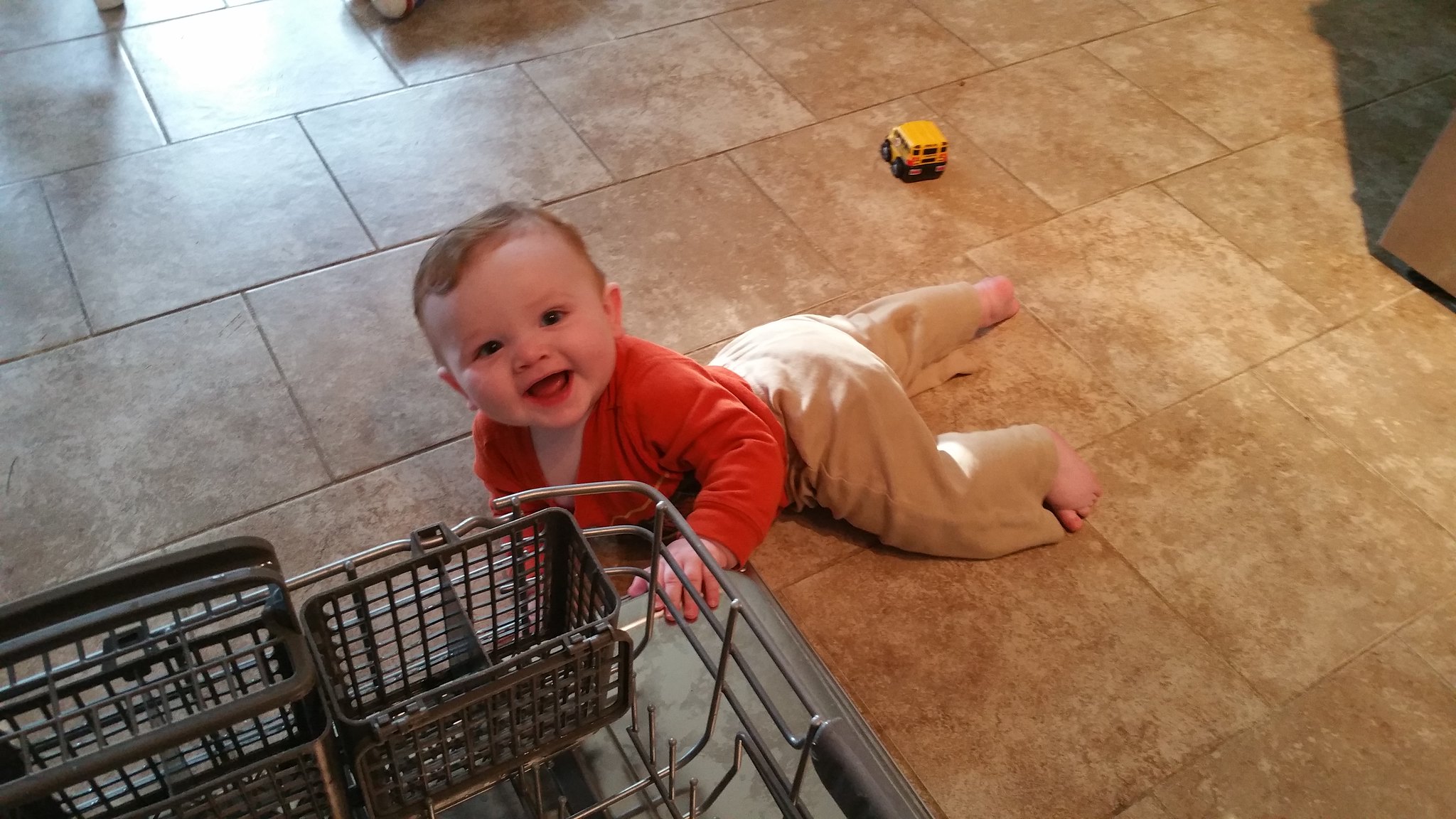 … and have even decided to start “helping” with the dishes. 😉 You are so strong, you’ve pulled that entire bottom rack out of the dishwasher before– YIKES. Gotta watch you like a hawk! 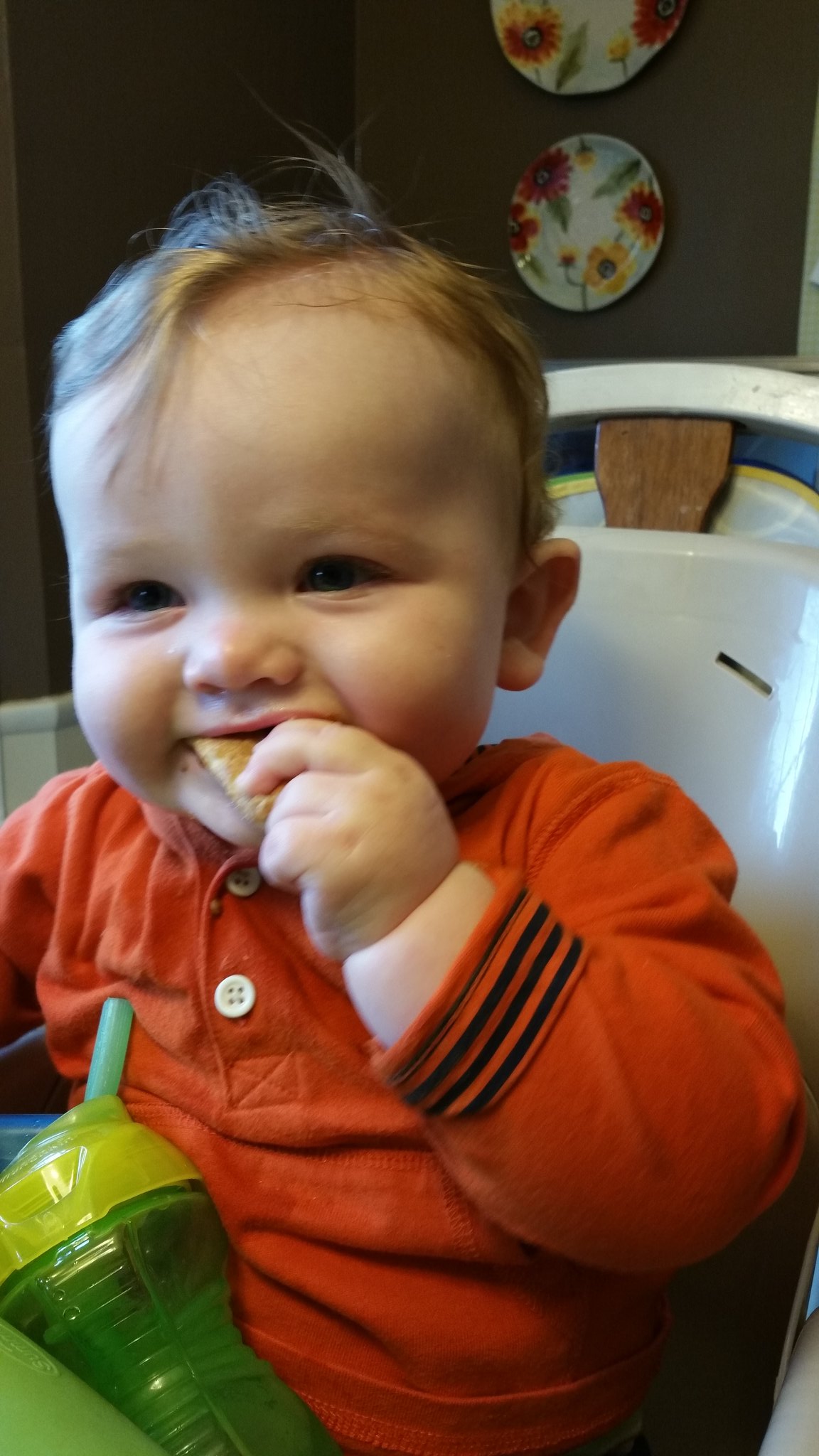 Enjoying some food (I think this was one of those baby teething biscuits)– you get so excited to try new things! The other night I let you try some bites of the greek yogurt I was eating… and you literally did a happy dance every time I held up the spoon for you. LOL.

Avocado is another food you really like. And this is a good example of “second child syndrome” — what should’ve been a somewhat quiet/peaceful eating video sounds like we’re sitting in the middle of Wonka’s chocolate factory. Luckily you don’t mind! 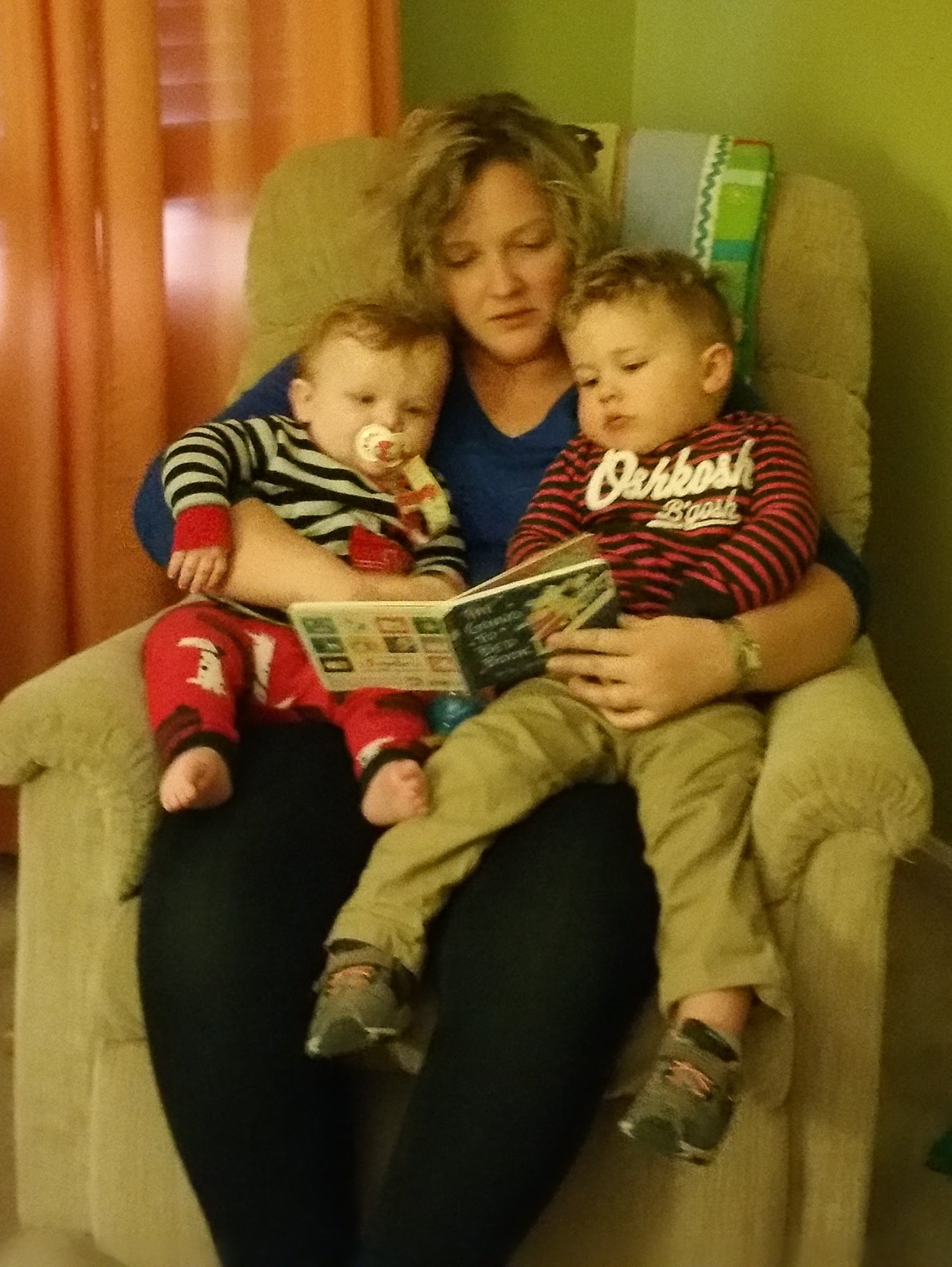 Reading a bedtime story. 🙂 Still my favorite time of the day! 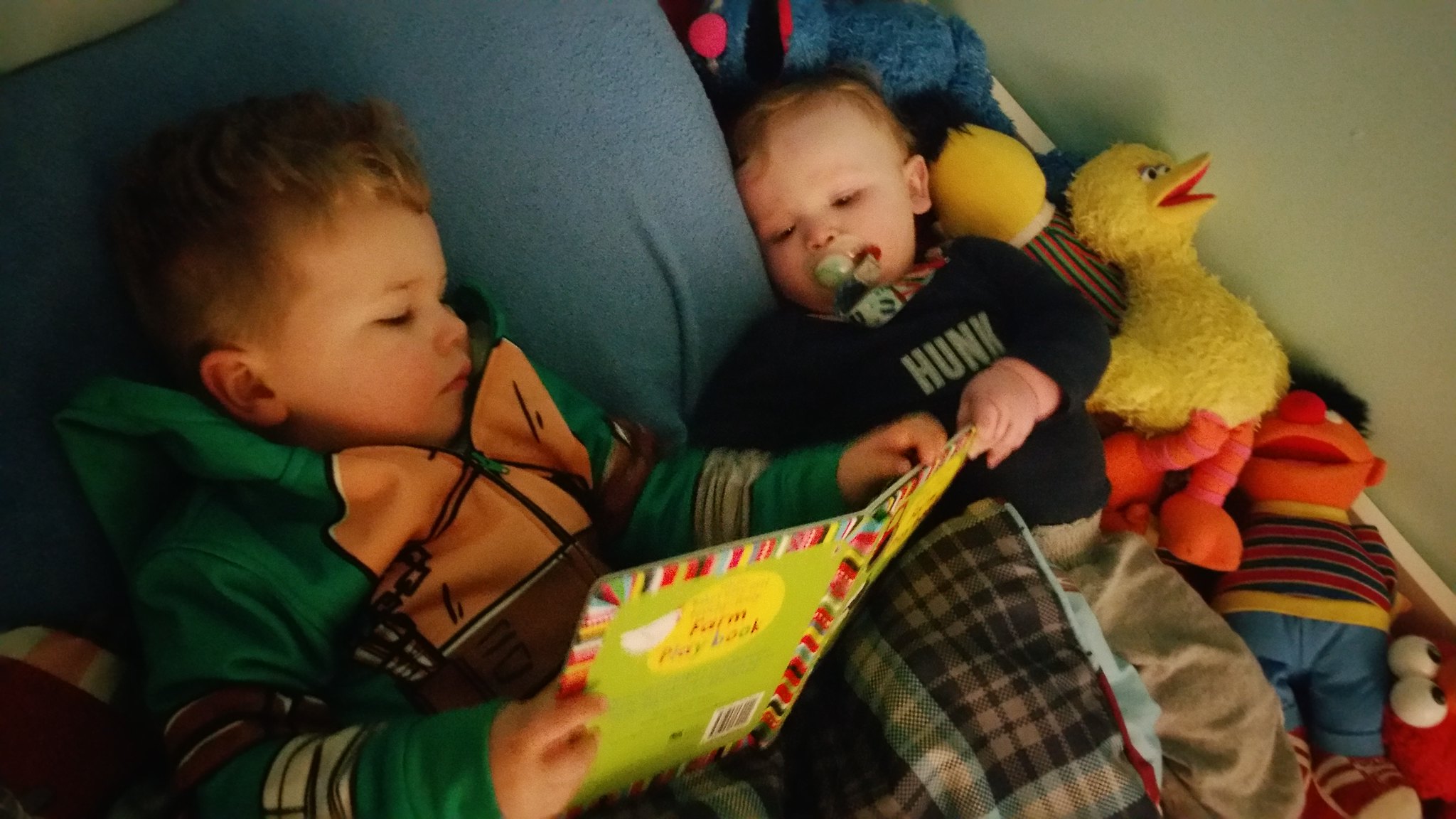 Another story, this time before nap. 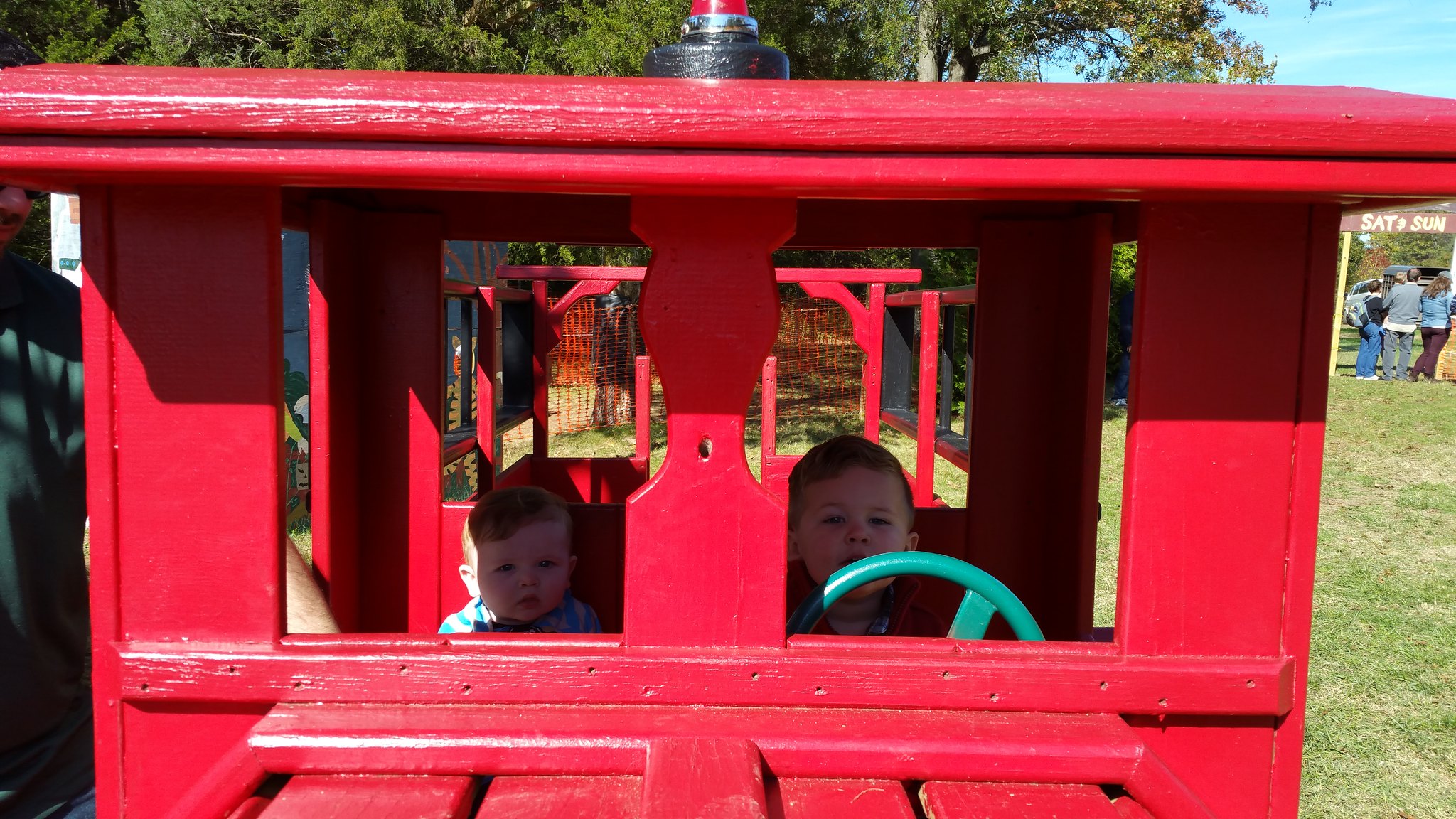 Enjoying the attractions at a local fall festival. We sat you in there and you looked at Alex’s crazy driving antics like “OMG, what am I getting into?” 😉

Speaking of Alex’s crazy driving antics, he has taking a keen interest in pushing your stroller when we go on our evening family walks. He’s very stubborn about not getting any help with it, which of course makes me super nervous… the two of you end up stuck in the grass a lot. :-\ He’s getting better at it though! 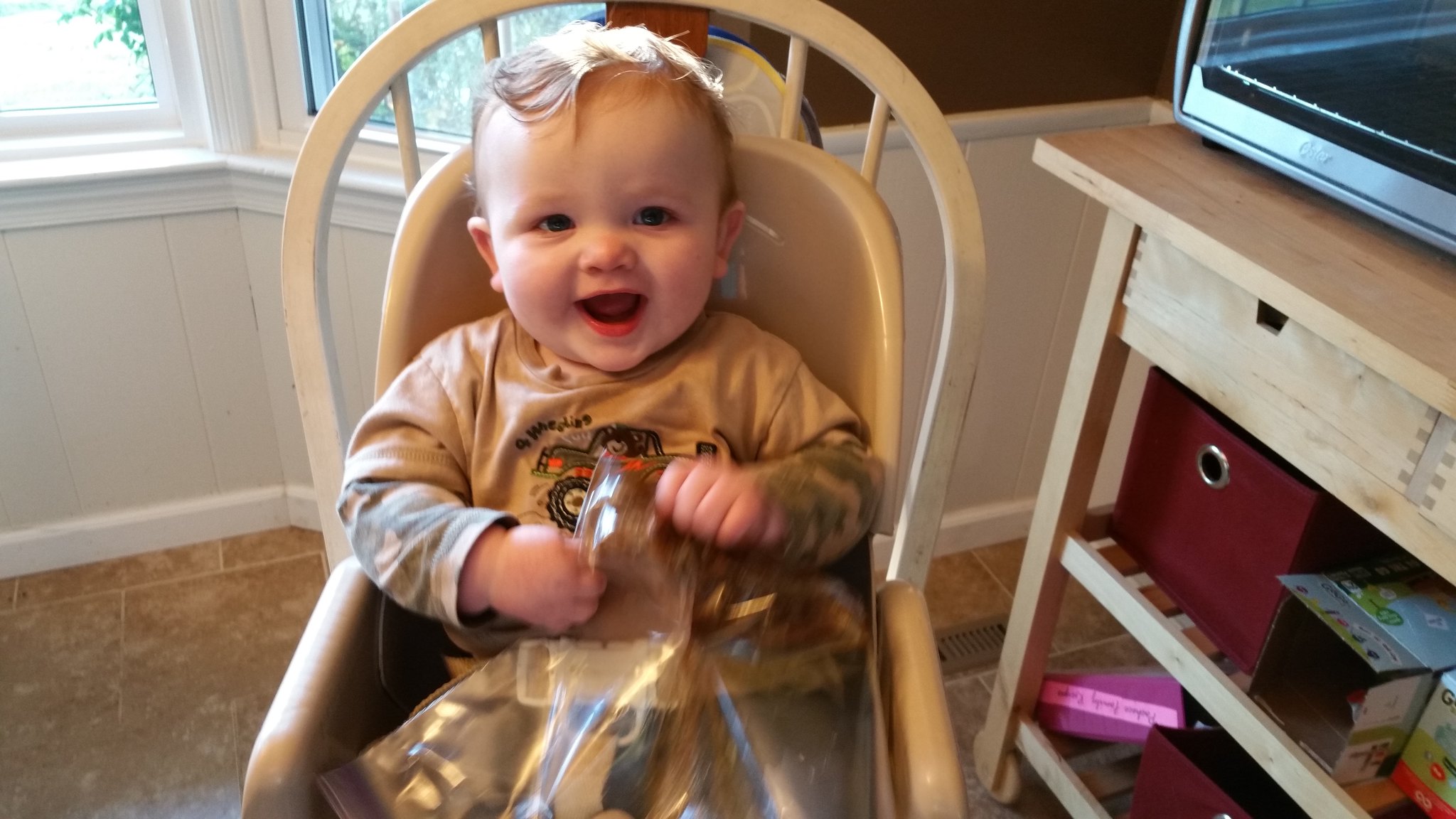 Another way to help me in the kitchen– pre-mixing my spices for recipes! This was for roasted butternut squash– and oh my goodness you looooooooved the resultant squash. Dad & I did too, so this is now one of our go-to side options for dinner. 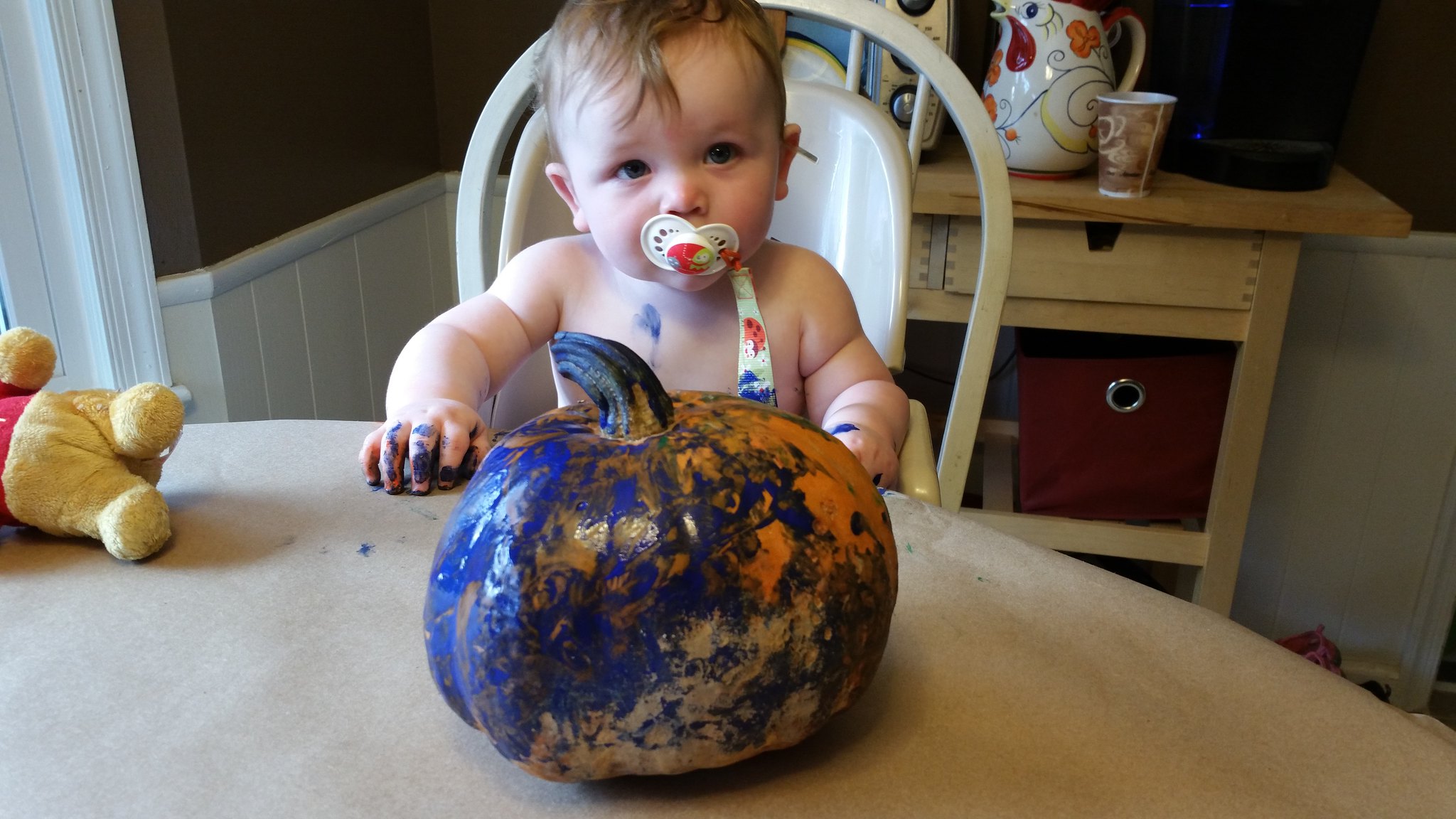 Painting your first pumpkin! I had to encourage you to get into it, but once you got started you enjoyed yourself. 🙂 Your tummy a slight blue tinge to it for a couple days though! 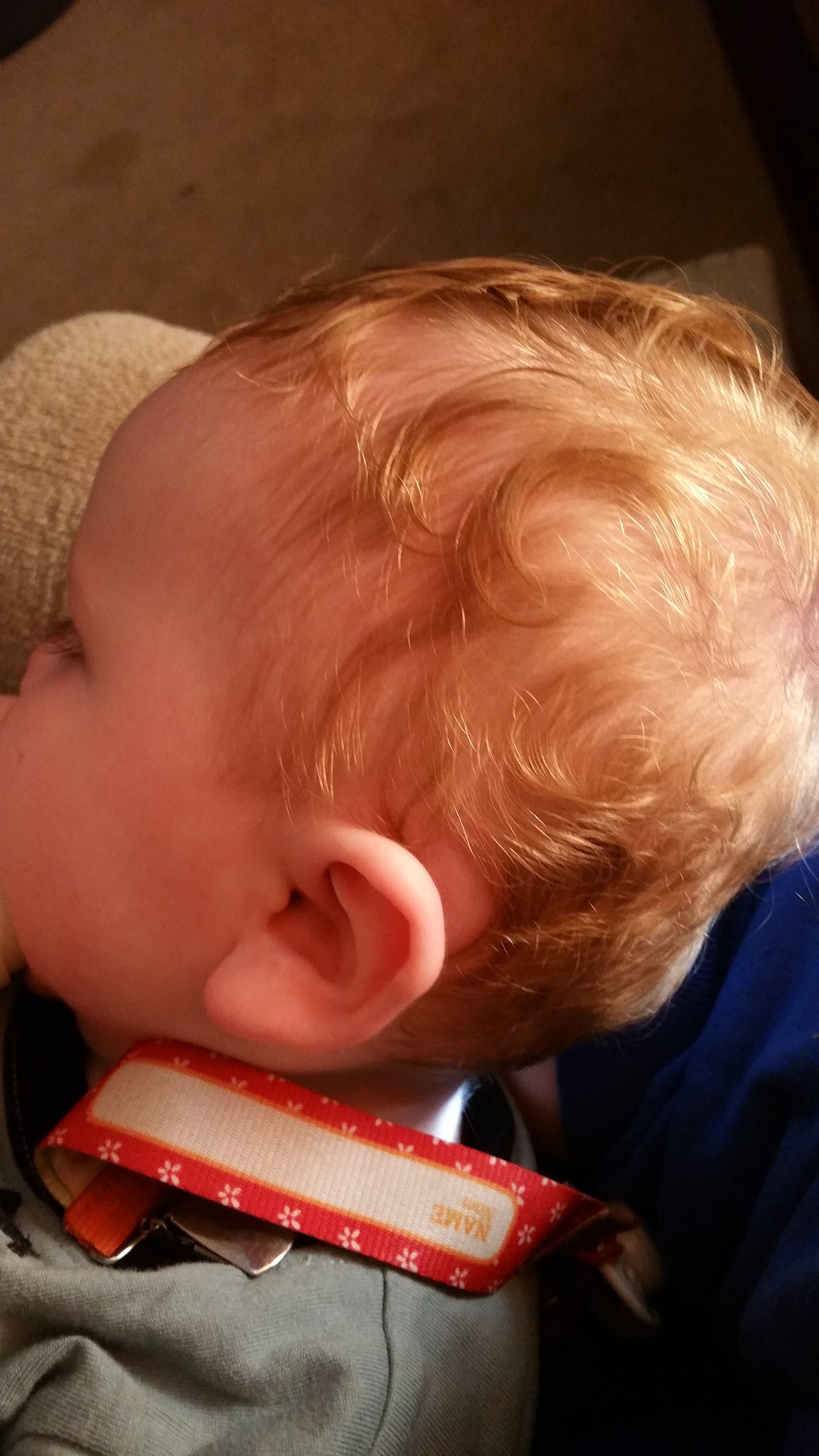 Trying to get a picture of your hair here, to show you how curly it’s getting! Very different from Alex’s hair at this age. It’s so cute! I wonder if it will stay curly. Given my & Dad’s hair textures, you’ve got a pretty good shot. 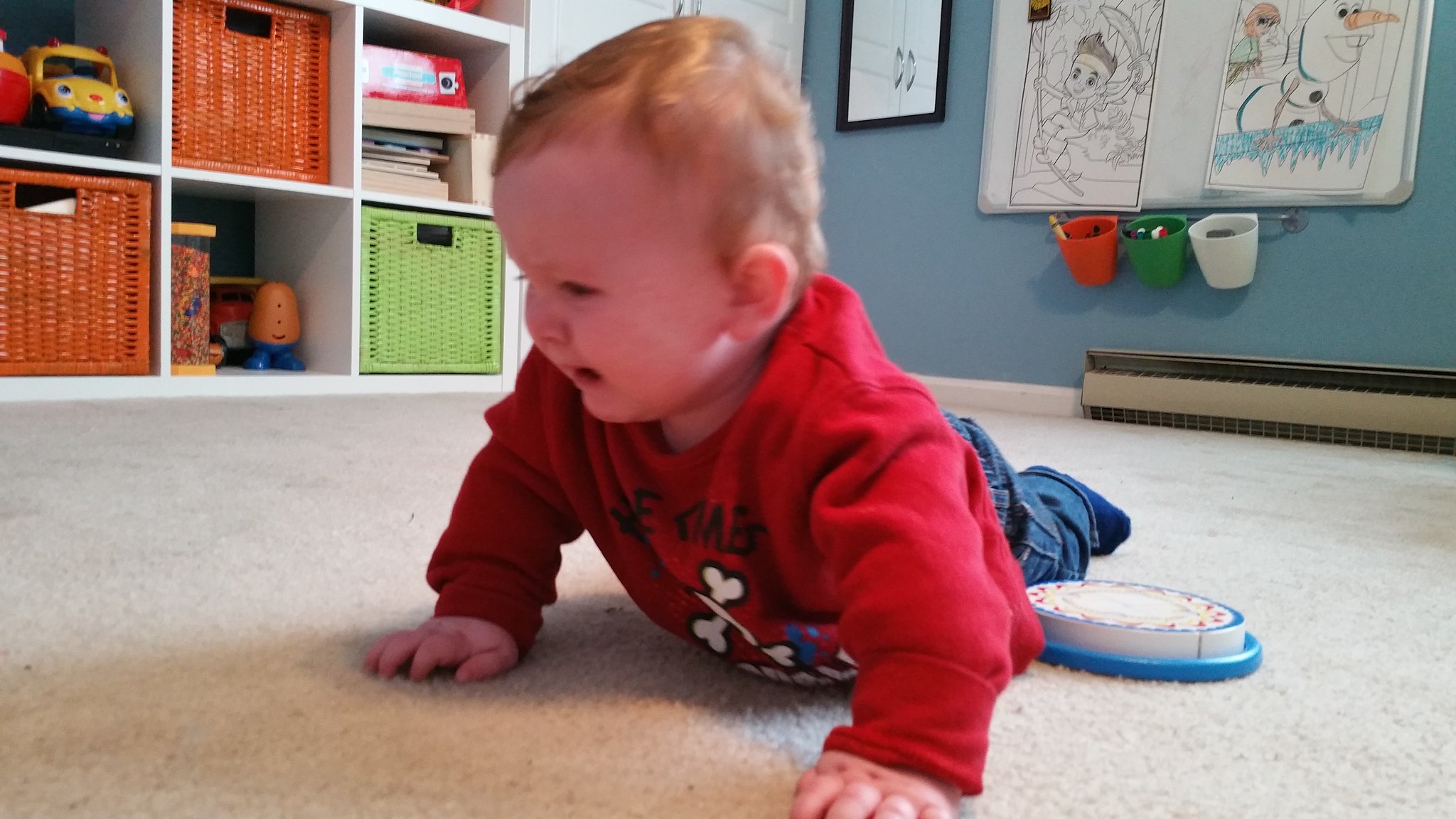 This was how you felt the first time you managed to propel yourself forward with just your arms. It was kind of an awkward push/face-flop and it didn’t look enjoyable to me either…

… but you’ve since learned to use your hips & legs as well, so your “Army crawl” has gotten much more comfortable & efficient for you! 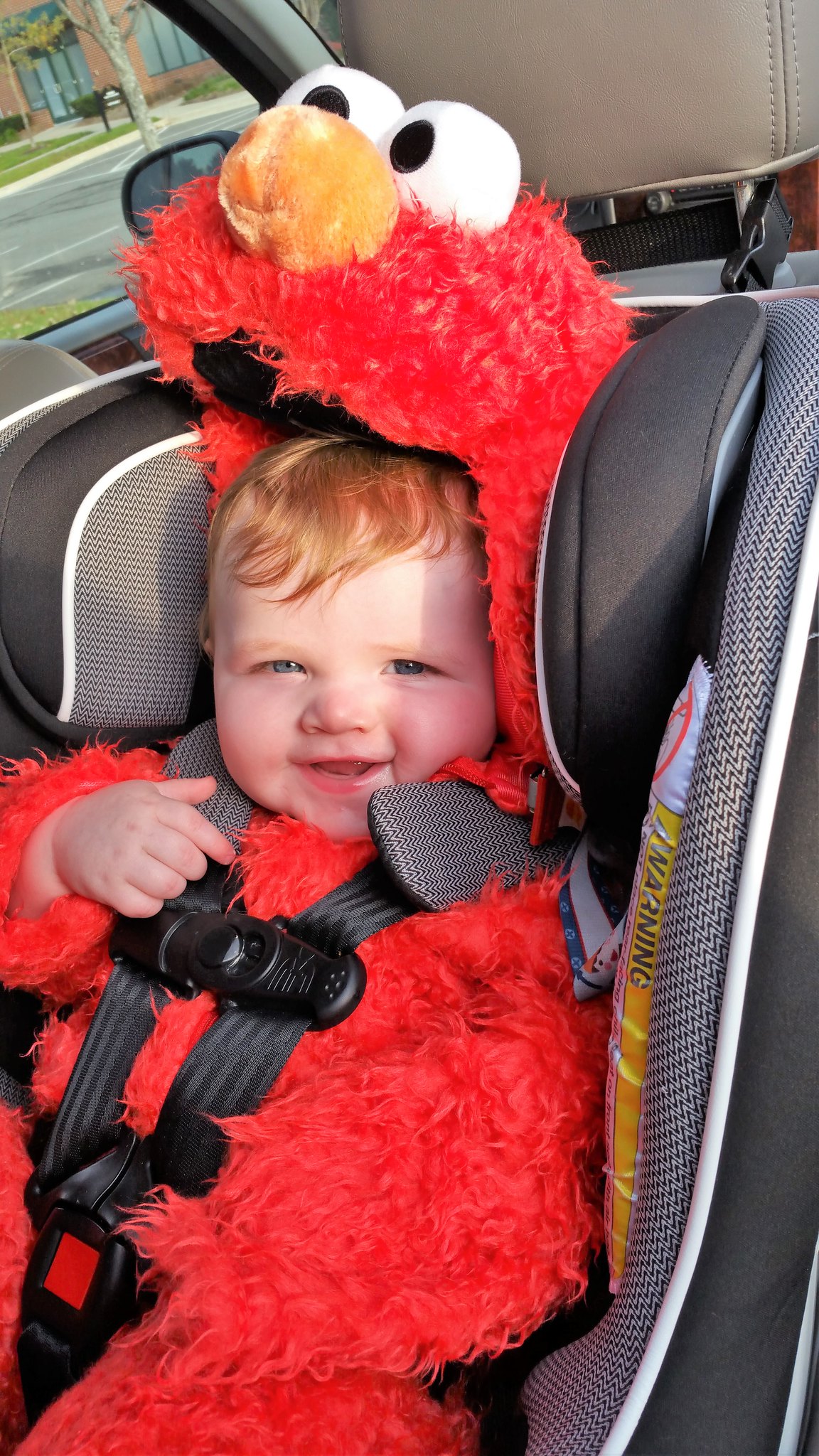 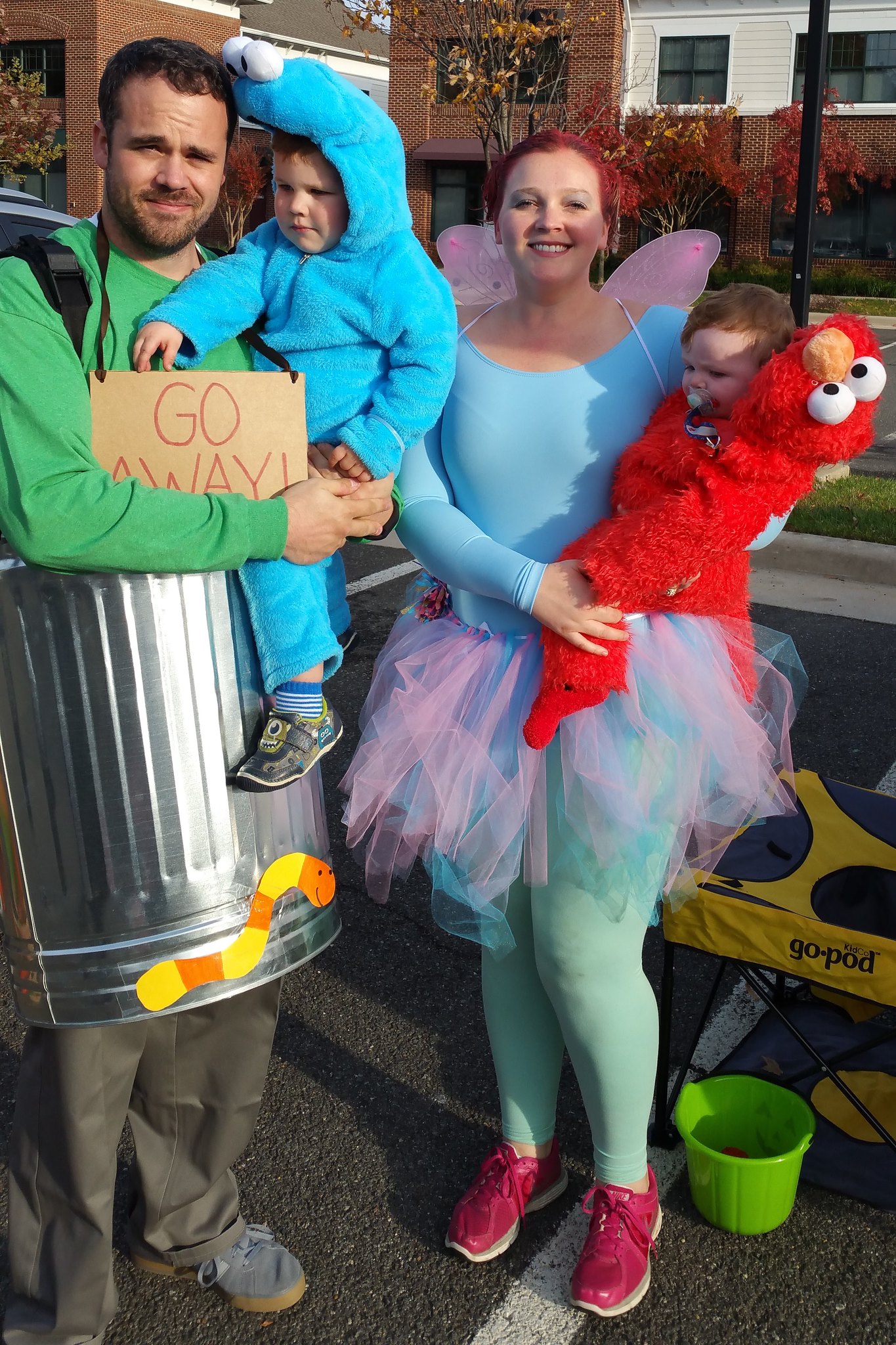 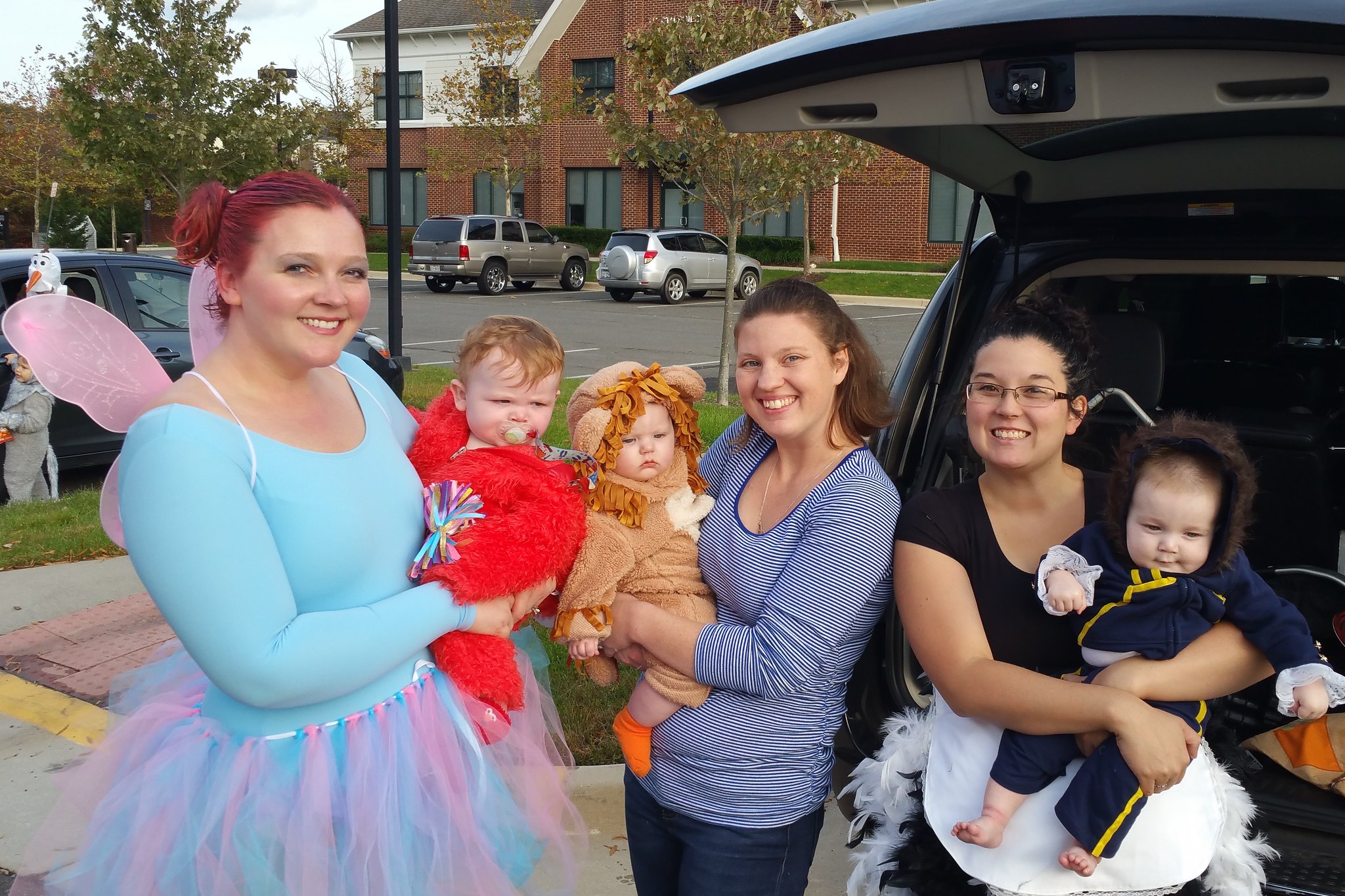 We went to our first Halloween party this past weekend! We went with a Sesame Street theme for the family’s costumes this year– you are Elmo, Alex is Cookie Monster, I am Abby Cadabby and Dad is Oscar the Grouch. Your costume is a touch too big but that’s okay, you don’t seem to mind. 😉 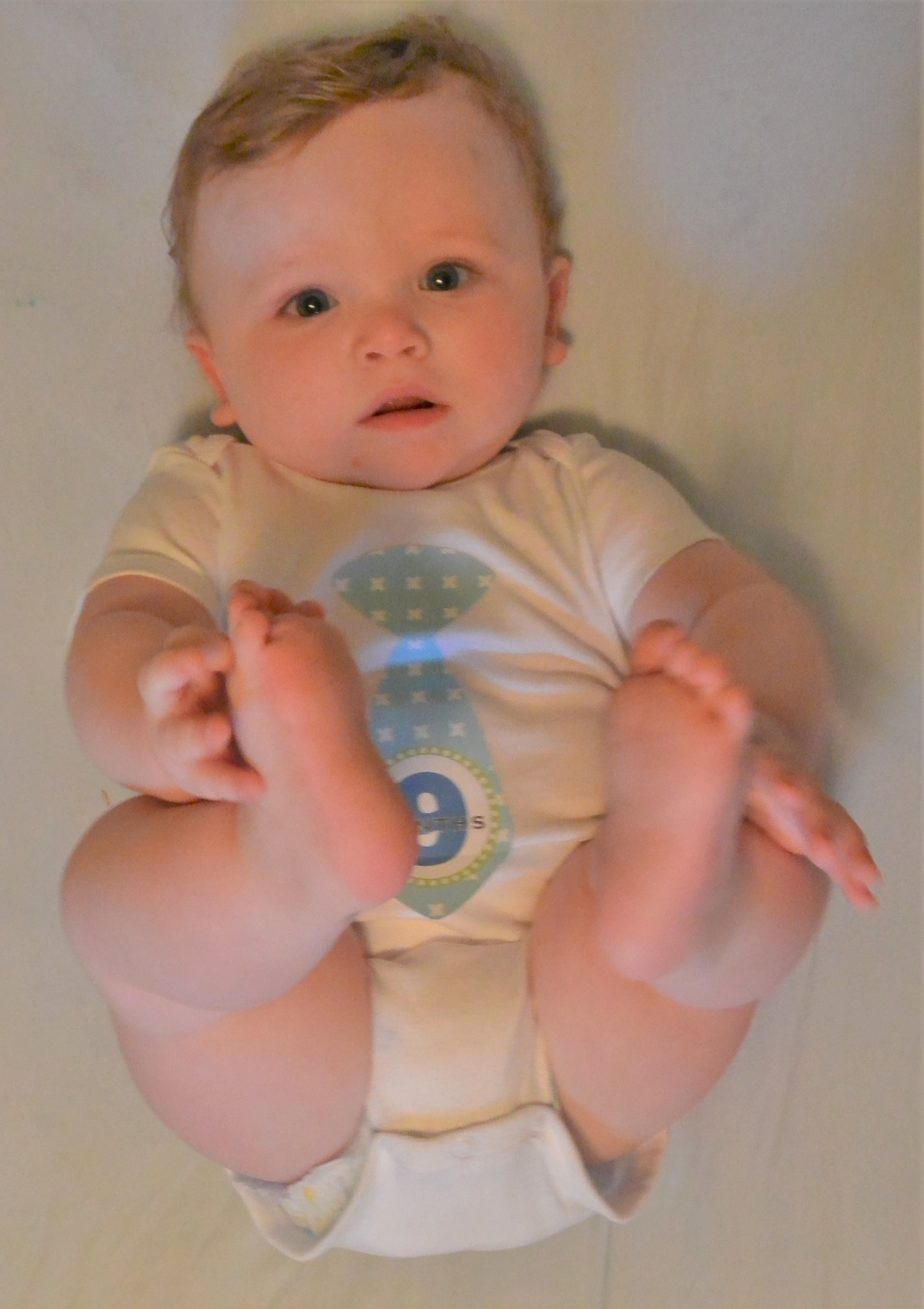 Okay, so getting your 9 month picture was TOUGH. I remember with Alex what a big PITA these last few monthly pictures are, once you start getting into rolling/crawling and moving around…. for you it was all of that, but also the fact that you LOVE playing with your feet, which blocks the view of the monthly sticker! 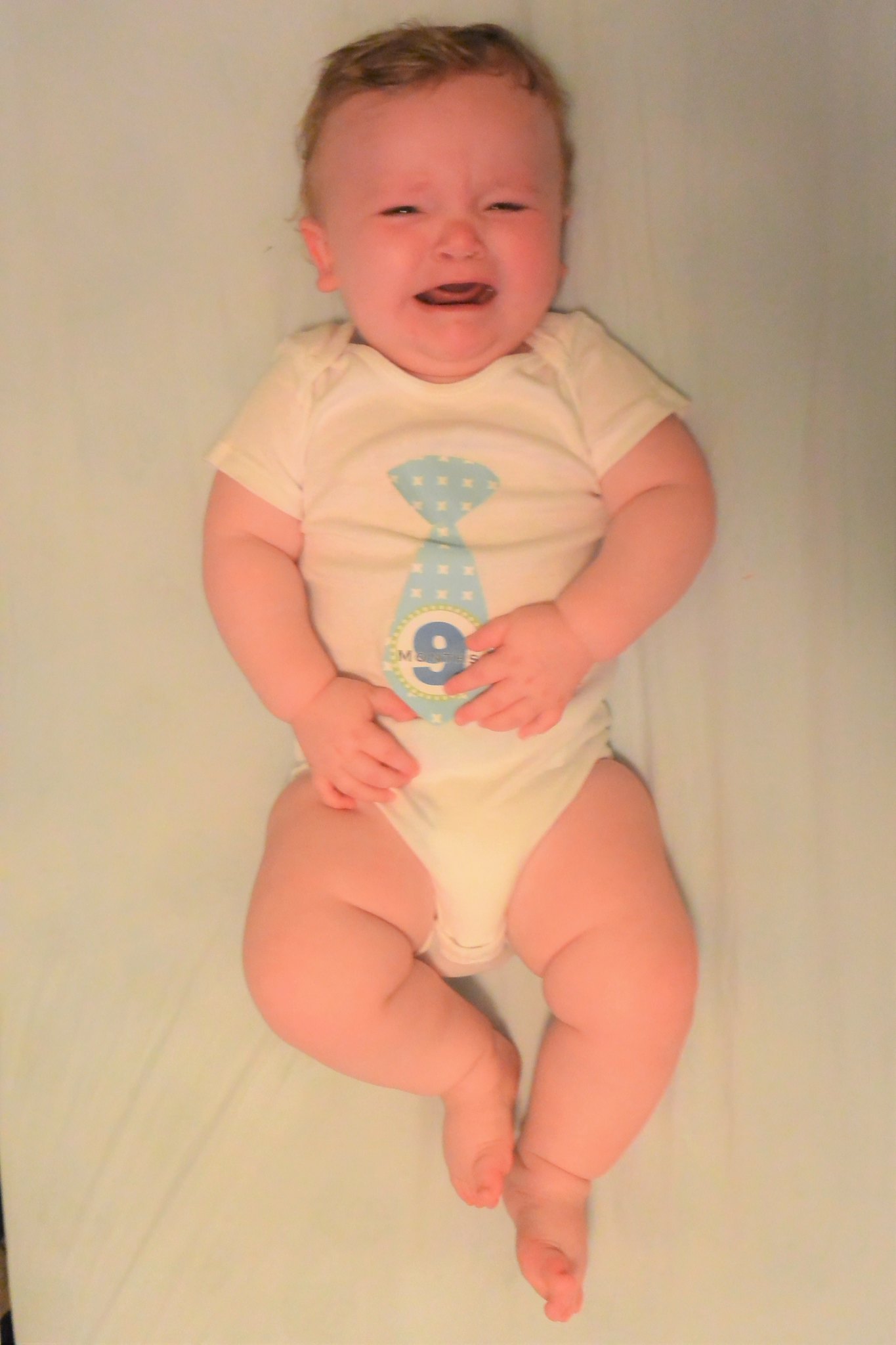 This is what you thought of my trying to keep you from rolling or playing with your feet. :-\ We were about 50 tries in & both extremely frustrated by this point. 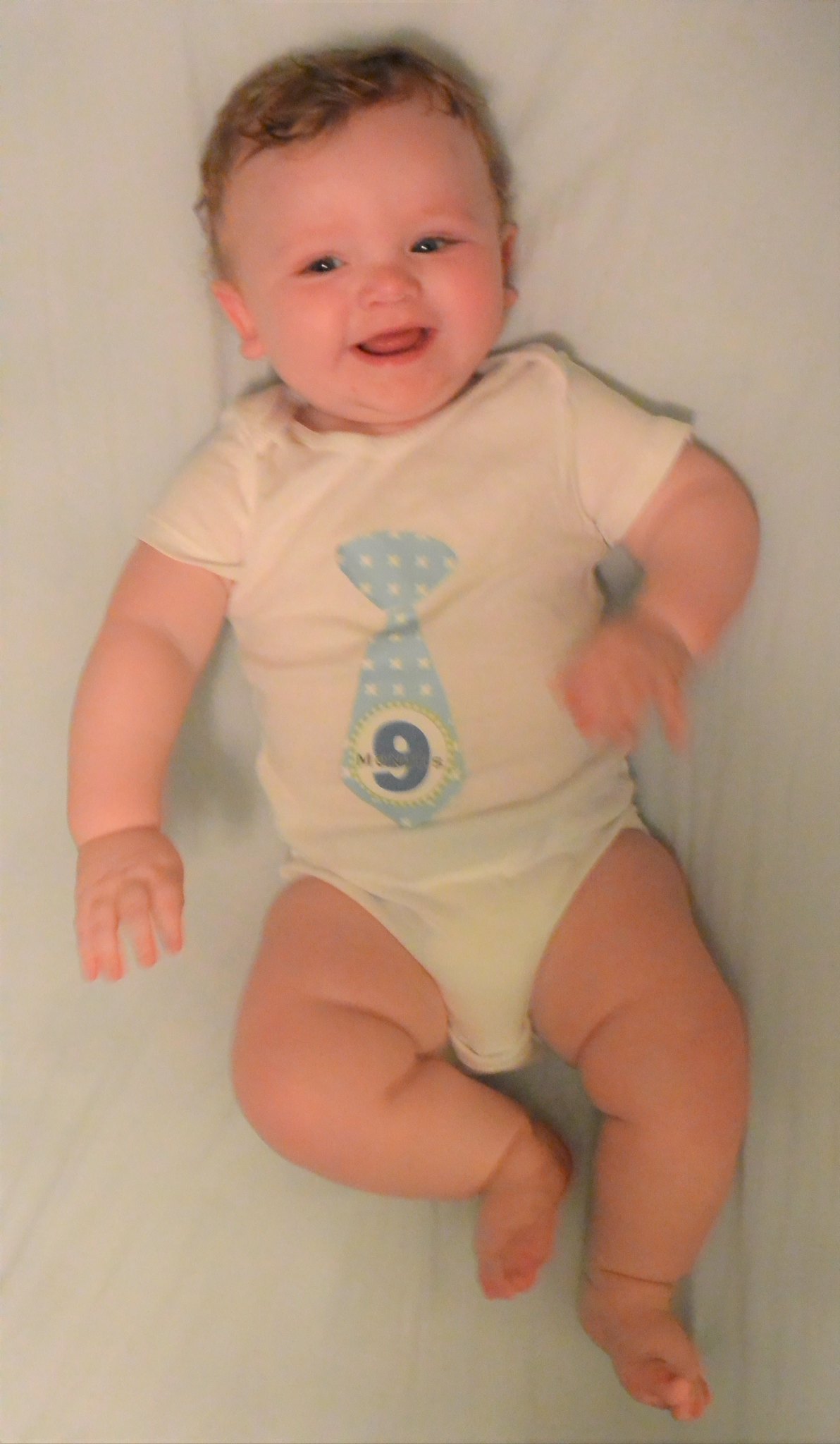 Finally Dad stepped in & saved the day– he was entertaining you from the edge of the crib, so we were able to at least get a smile + feet down + on your back picture. You’re looking at Dad & not the camera, but I’ll take it! Haha. We also had your professional 9 month pictures done last week, but I don’t have them back yet. I daresay they turned out better than this though!

So even though this video doesn’t show you much, I thought it was worth sharing here because it’s really about you. Pretty much since you were born, the “theme song” of our household has been “Charles in Charge” (which is an old 80’s tv show theme song, actually). We sing it all the time when we’re doing something with you. A few weeks ago I was changing your diaper and singing “Charles in charge of our days…” and all of a sudden Alex pipes in with “and our nights! Charles in charge of our wrongs and our rights!!” and it just cracked me up. I didn’t realize he’d picked up the lyrics, but given how much we sing it around here I’m not surprised! The other song we sing with you a lot, which Alex has also memorized apparently, is one I made up at some point early on… it just goes “Charlie Bean, Charlie Bean, cutest baby ever seen!” Actually I’m not sure if I’ve ever mentioned my nickname for you– ever since you were a newborn I’ve called you Charlie Bean. I have no idea why, I guess because you’re tiny & round like a bean? Haha. Anyway, I almost always call you Charlie Bean or sometimes just Beanie. 😉 Or, when you’re getting into trouble I call you Charles John… which is happening more & more frequently these days now that you’re on the move!

Anyway, I think that’s about it for this month! We’re quickly coming up on your first holiday season… and just a hop, skip & jump after that is your first birthday. ACK! Lots of wonderful new adventures in store for you over these next few months, but man I’m starting to get sad that your first year has flown by so fast & you’re so quickly moving out of the baby stage. :-\ This is such a wonderful age, and you are such a wonderful baby…. how did I get so lucky?!

Until next time, Charlie Bean! 🙂