You’re just over 5 months old now… coming up on half a year already! Each day you’re becoming more and more interactive. You seem to be happiest when someone is talking to or playing with you. If it’s not nap time and no one’s paying attention to you, you get upset! Luckily your brother gives you TONS of attention. 😉 You also really love holding things and have gotten pretty good at reaching out to grab toys or other items that you want. For this reason I keep a small rattle along with your “bunny lovey” in your carseat to help keep you entertained. 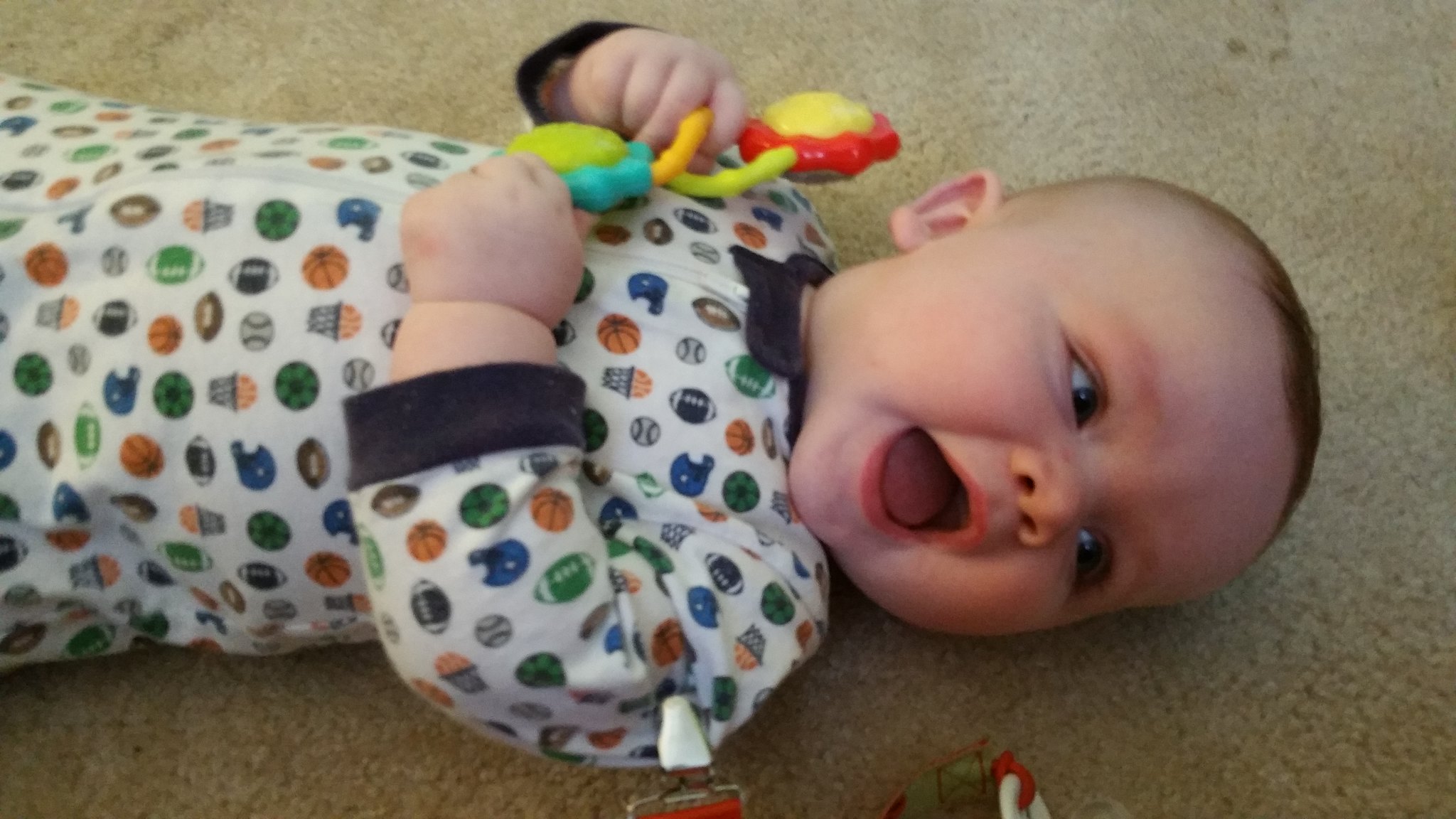 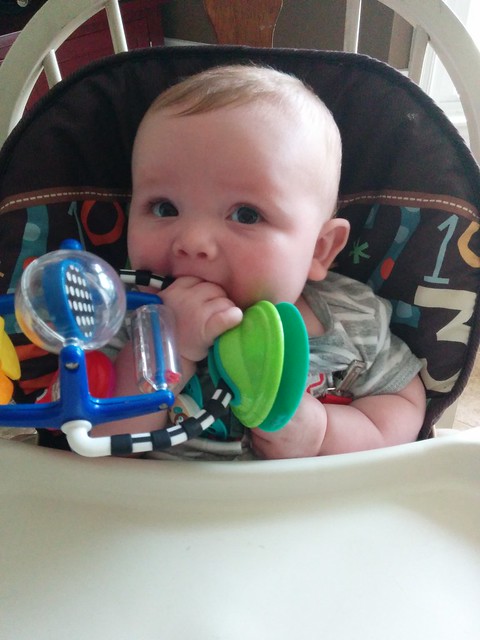 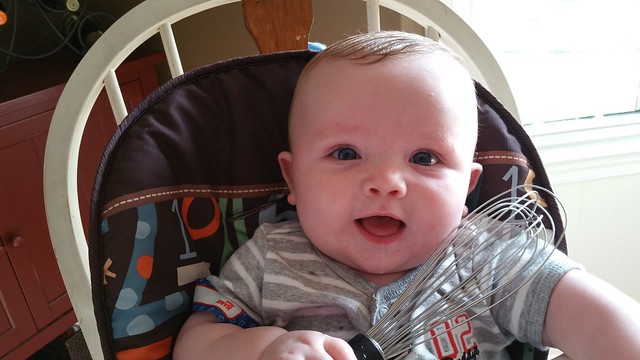 Speaking of your interests, it is clear that you’re more interested in sitting & observing vs. moving around. I find it interesting to note the differences between your personality & your brother’s personality that are evident already. At this age, Alex was rolling all over the place and getting up on hands & knees in preparation for crawling…. but he was nowhere near being able to sit up independently (he was pretty late to master that skill; it was more like 7 months). You on the other hand HATE being on your stomach for very long, don’t roll much (but it does occur more often than it did a month ago) and crawling seems very far off for you… but you are already getting good at the “tripod” method of sitting, so I suspect you’ll have sitting up mastered within the next few weeks: 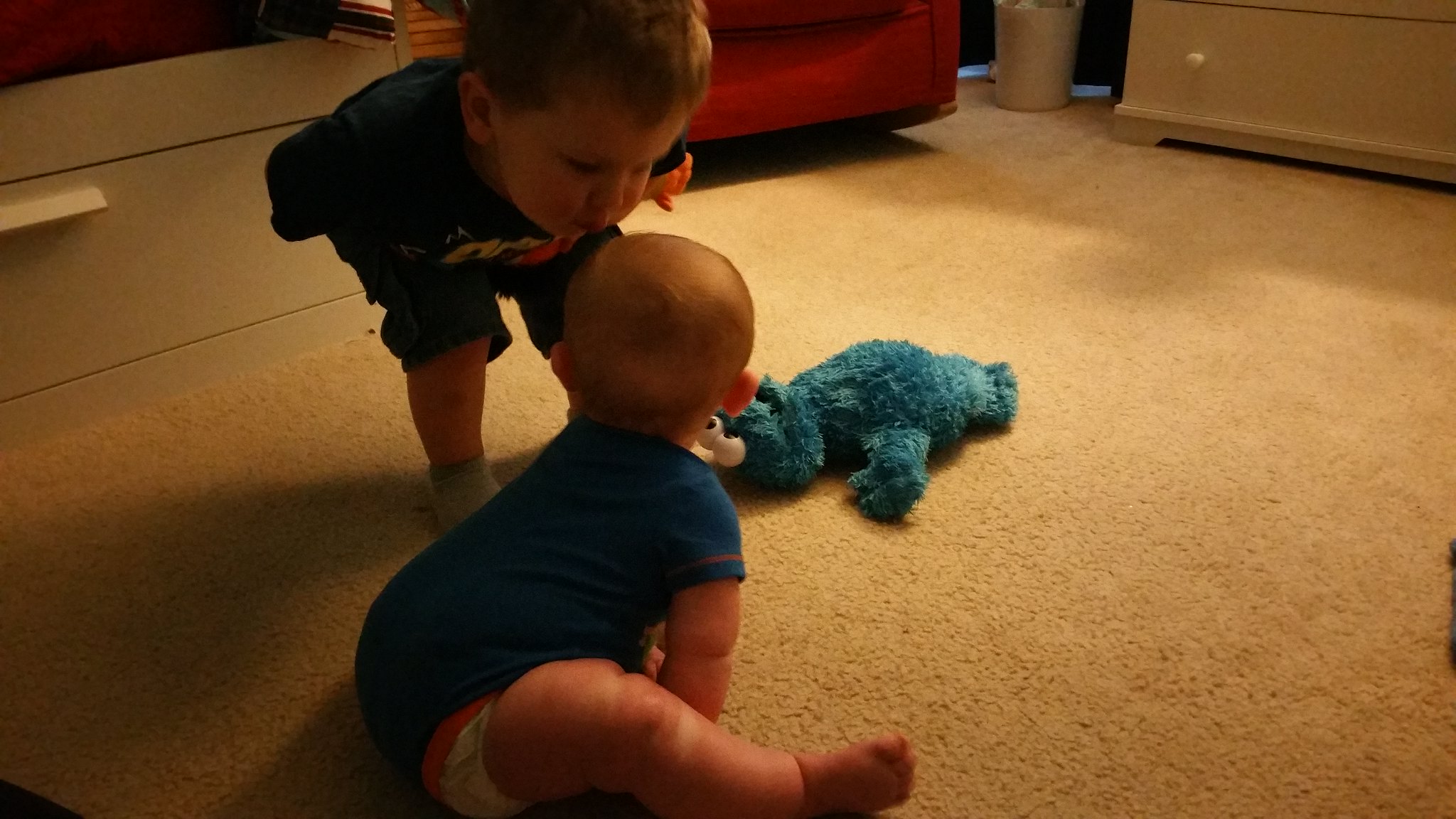 The other skill you’ve been working on recently is eating! We started baby oatmeal and pureed baby food with you this month, which you took to quickly. Now you enjoy some oatmeal for lunch and some type of fruit or veggie for dinner every day… and when we finish you’re usually fussing for more! So far other than oatmeal you’ve tried green beans, avocado, carrots, squash, sweet potatoes, bananas, apples, and pears. There doesn’t seem to be anything that you don’t like so far. 🙂 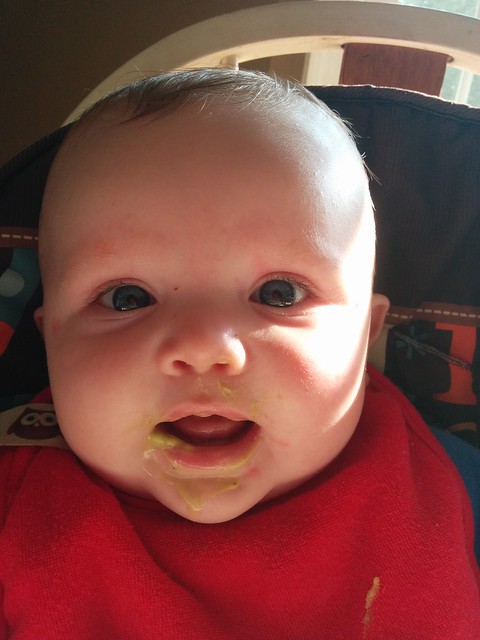 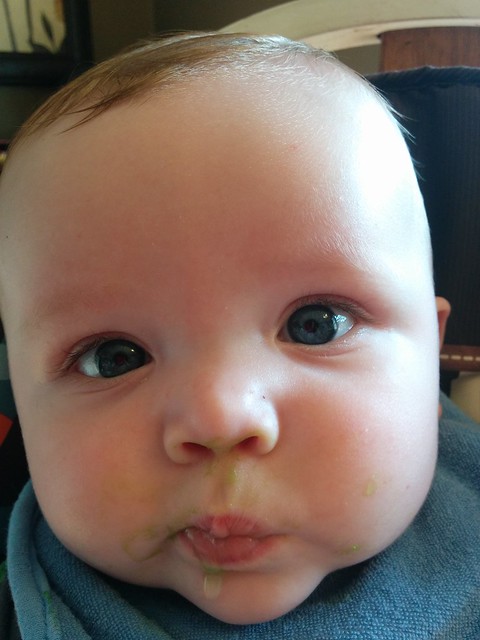 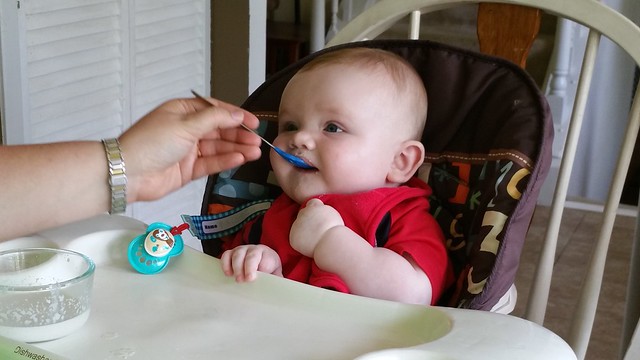 So as you can see, you’re well past the newborn phase of life and pretty solid into “babyhood”… this seems to be where the development of skills and milestones seems to shoot ahead at a rapid pace for the next couple of years. Then one morning we wake up and the baby has been replaced with a little boy! Having just gone through this with Alex, I know all too well how fleeting this period of life is & am trying to soak it in with you as much as possible. I live for the weekends, because that’s pretty much the only time I have to just hold you and watch you sleep anymore… 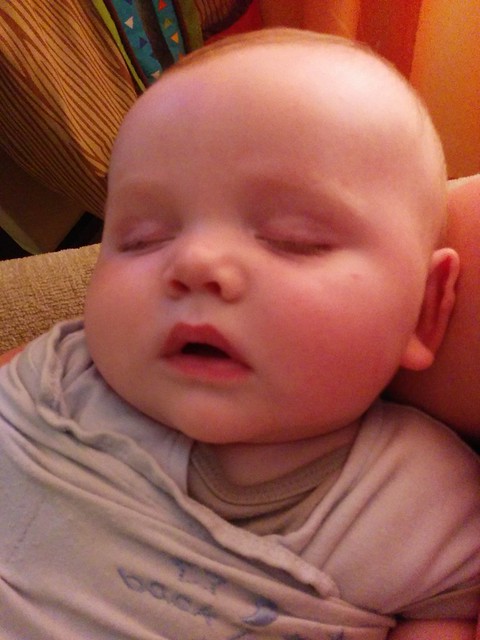 You can see in this picture, which was taken a few weeks ago, that you were wearing one of the last remnants of the “newborn” phase– the swaddle blanket. At your 4 month check-up, the pediatrician stressed that we really needed to work on breaking you of the need to be swaddled while sleeping because it poses a safety concern, should you roll over in your sleep during the night. So we tried to help you gradually ditch the swaddle by leaving just one arm out for awhile, then wrapping the swaddle around your tummy so that both arms were free, and finally ditching the swaddle entirely. It led to all of us getting much less sleep for awhile, but you were making steady progress until one day you decided that going unswaddled was for the birds! Out of the blue you refused to sleep AT ALL and cried endlessly whenever we tried to get you to lay down and sleep in your crib. Finally we gave in and put the swaddle back on you, and everyone enjoyed a good night’s sleep. I suspect that you are/were teething as we can see the telltale white spots on your bottom gums, and perhaps the discomfort from that made it difficult for you to settle down and go to sleep without the swaddle. I felt guilty about giving the swaddle back, but it was clear that you were going through something and just weren’t ready to be rid of the swaddle just yet. We decided to give it a few weeks & then try again, but a few nights ago you beat us to the punch! You had another night where you could NOT fall asleep and cried endlessly, squirming your arms around within the swaddle. After trying everything I had in my bag of mommy tricks with no success, I finally opened the swaddle to see if that might help & BOOM! You were out like a light and slept soundly all night long. Since then you’ve been swaddle free and haven’t looked back. It’s funny– Alex did the same thing, but it happened earlier on with him. I guess it just goes to show that each kid has their own agenda & their own timeline… and you just have to watch their cues & let them tell you when they’re ready or not ready for things like this.

And so ends the Swaddle Saga. Phew! 😉 I’ll be packing up and getting rid of all your swaddle blankets within the next week or two, along with your entire wardrobe in size 6 months (which you grew out of a few weeks ago, but I’m just now getting around to pulling it all out of your closet). Anyway, other than that we’ve just been living the daily grind during the week, getting into a few adventures on the weekends and just enjoying time together as a family. Your brother especially is never far from your side… 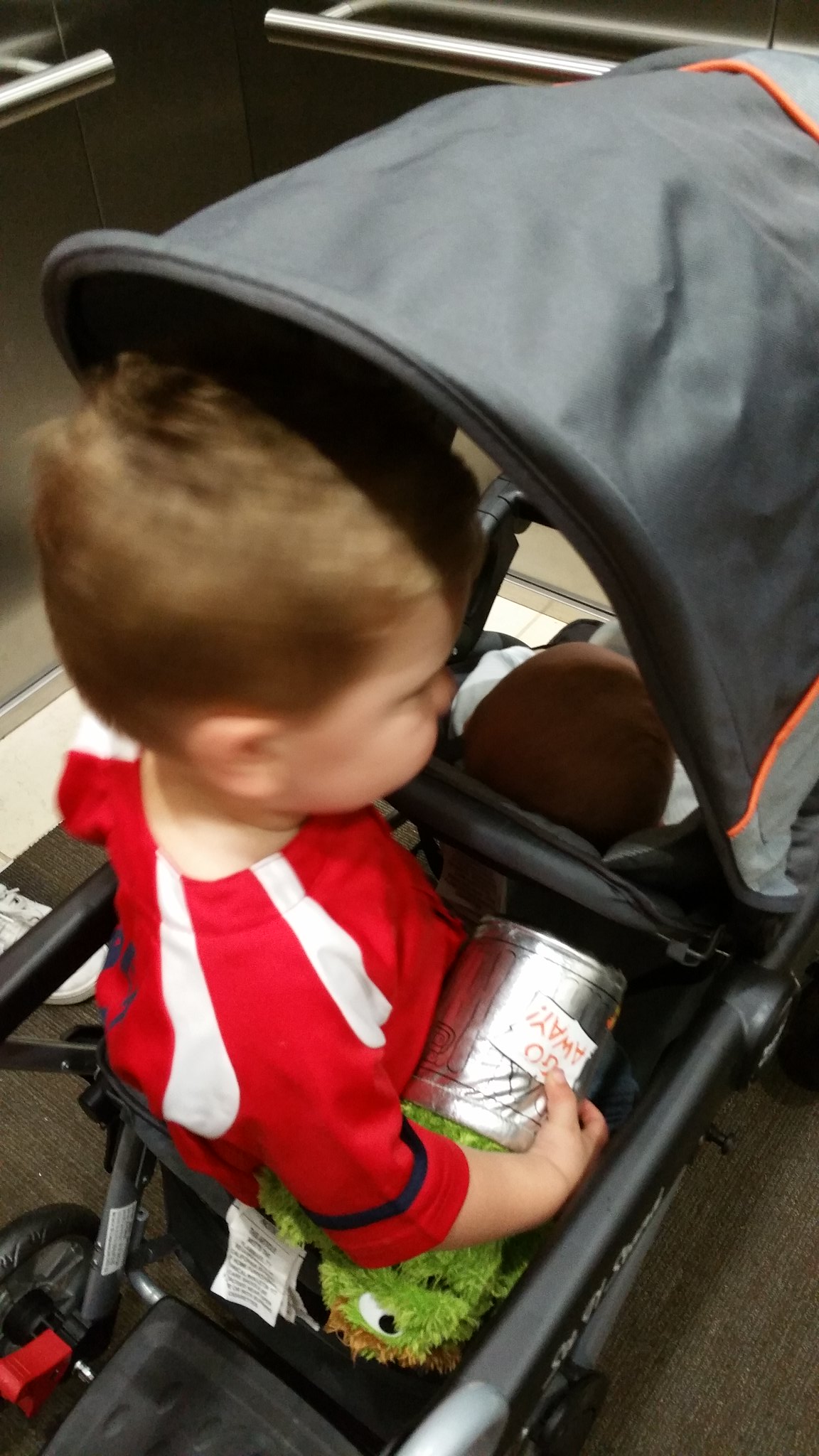 I tried to get a picture of Alex kissing you while y’all were riding in the double stroller, but wasn’t quick enough. He insists on sitting facing you rather than facing the back of the stroller (as is intended) because he wants to be within kissing distance of you at all times. LOL 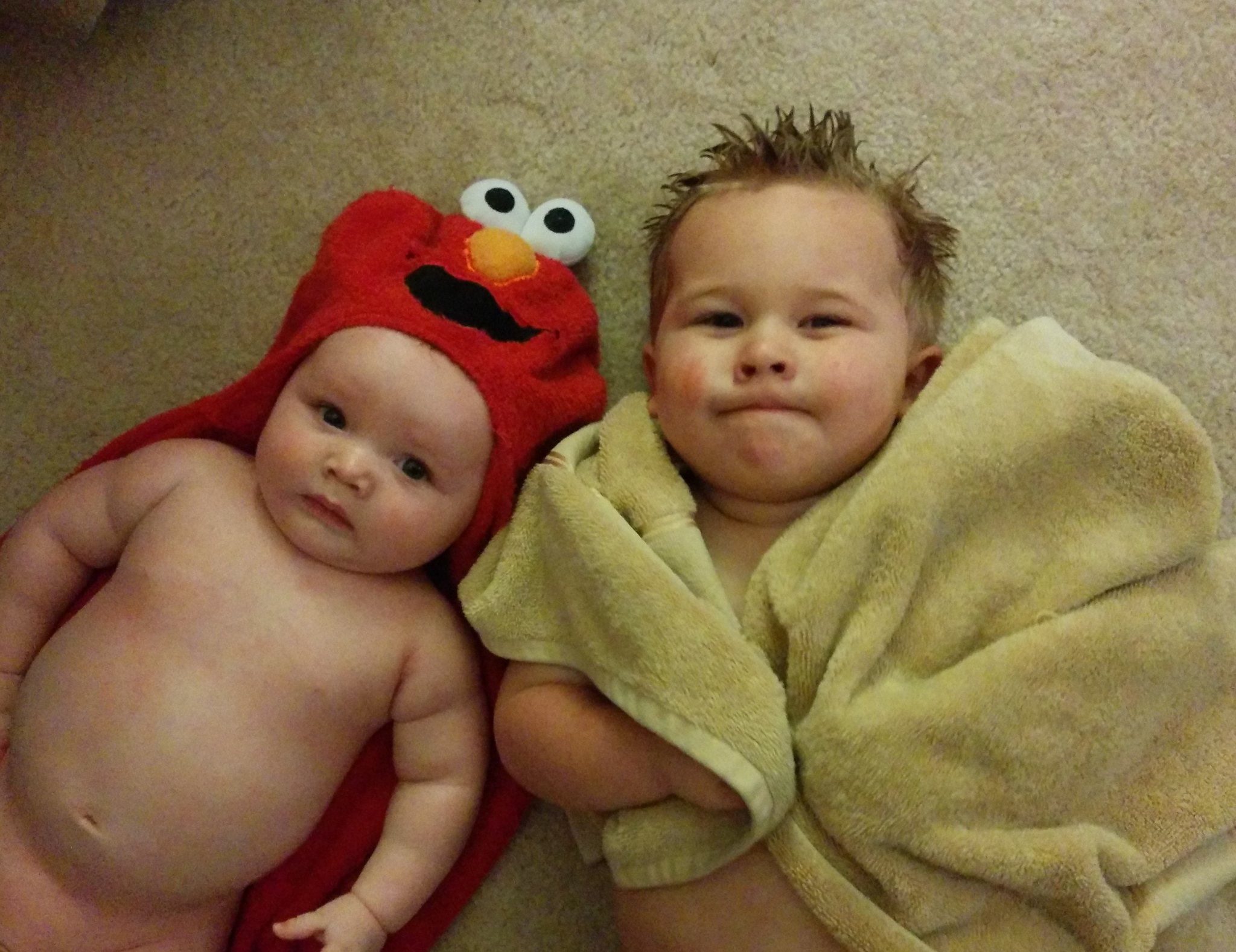 Drying off after bathtime. Sometimes I put your little infant tub into the big tub so that you & Alex can take baths together. He likes to entertain you with his Sesame Street bath puppets! 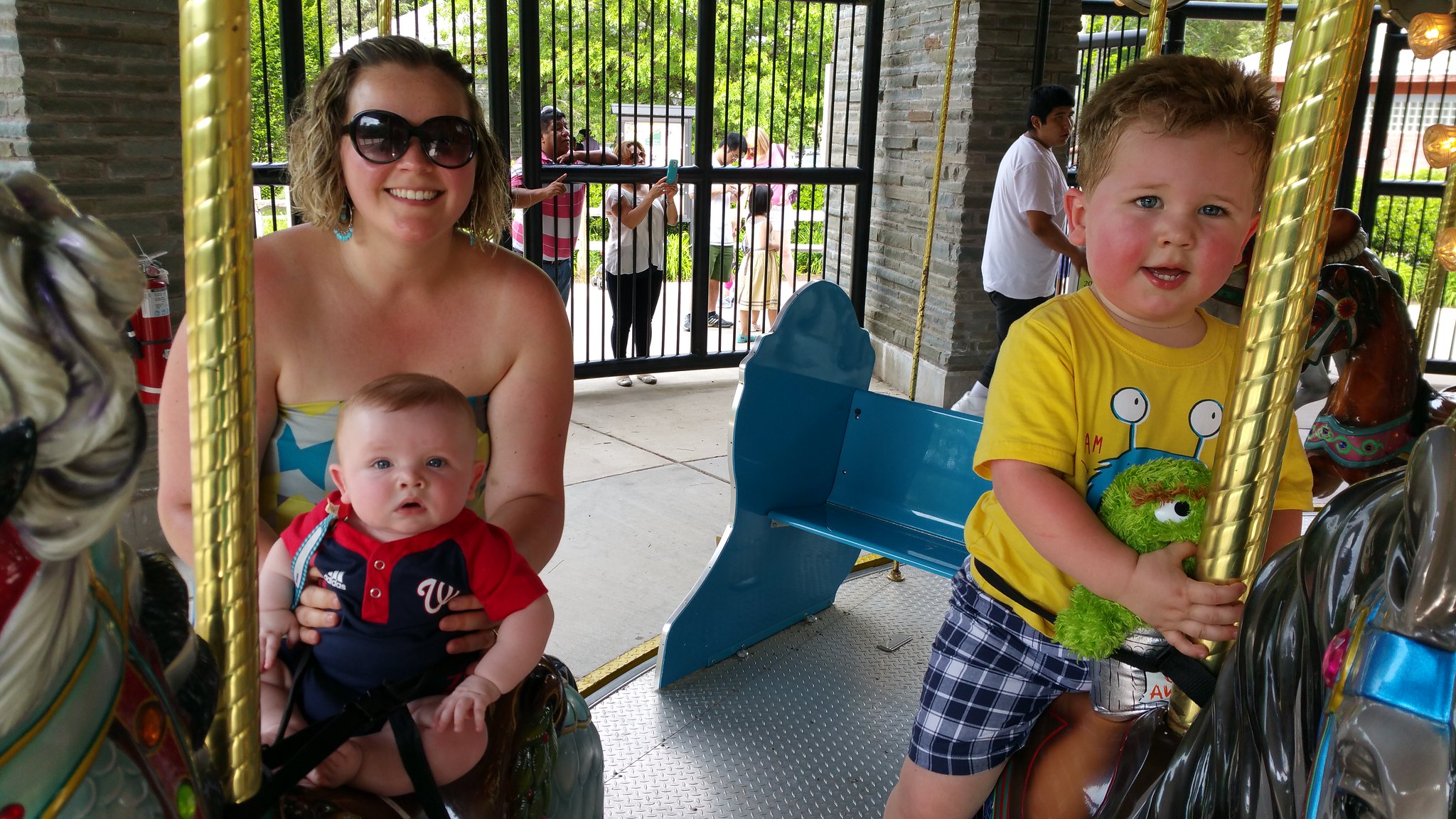 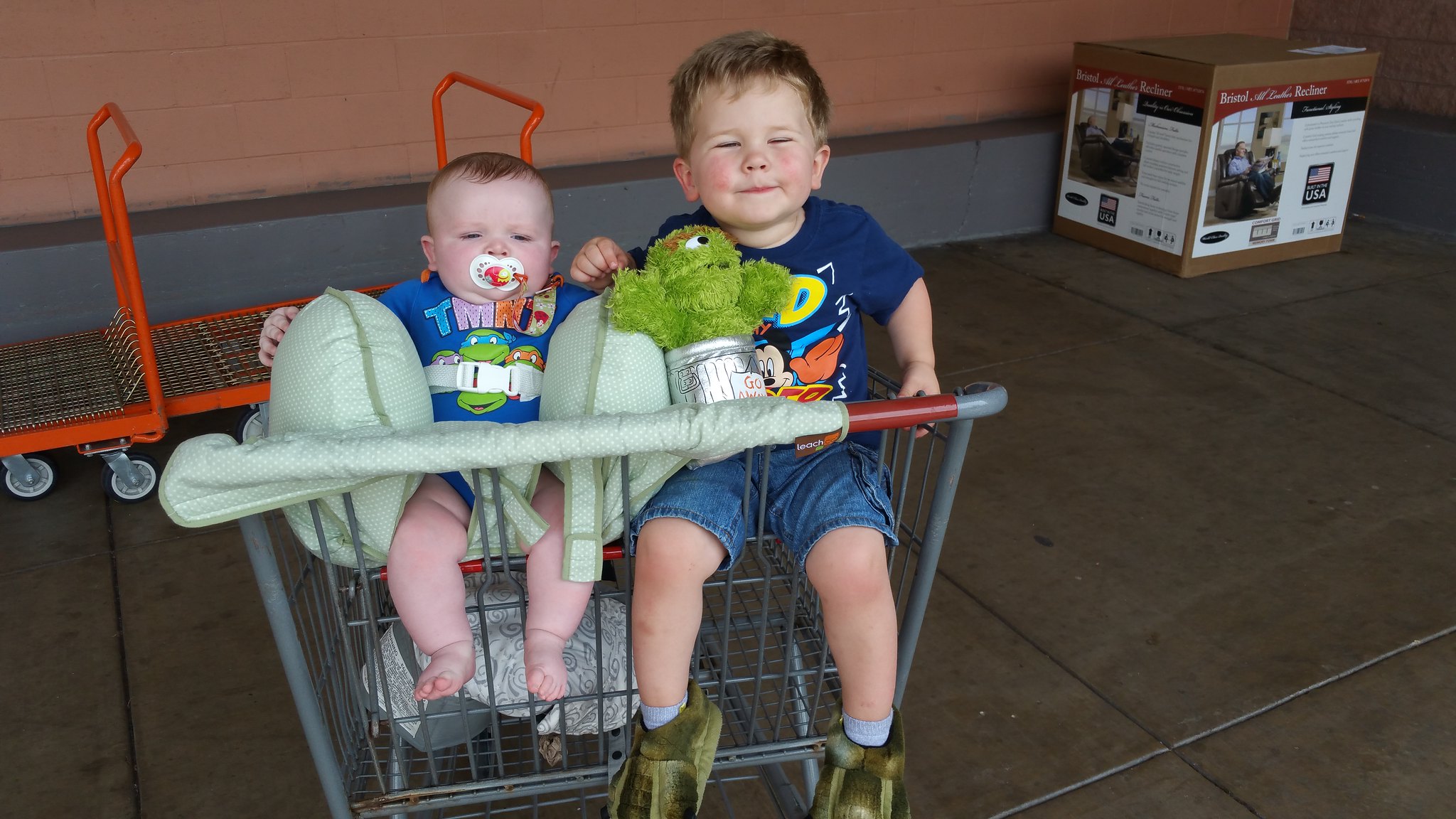 A couple of firsts this month: your first carousel ride and your first shopping cart ride! 🙂 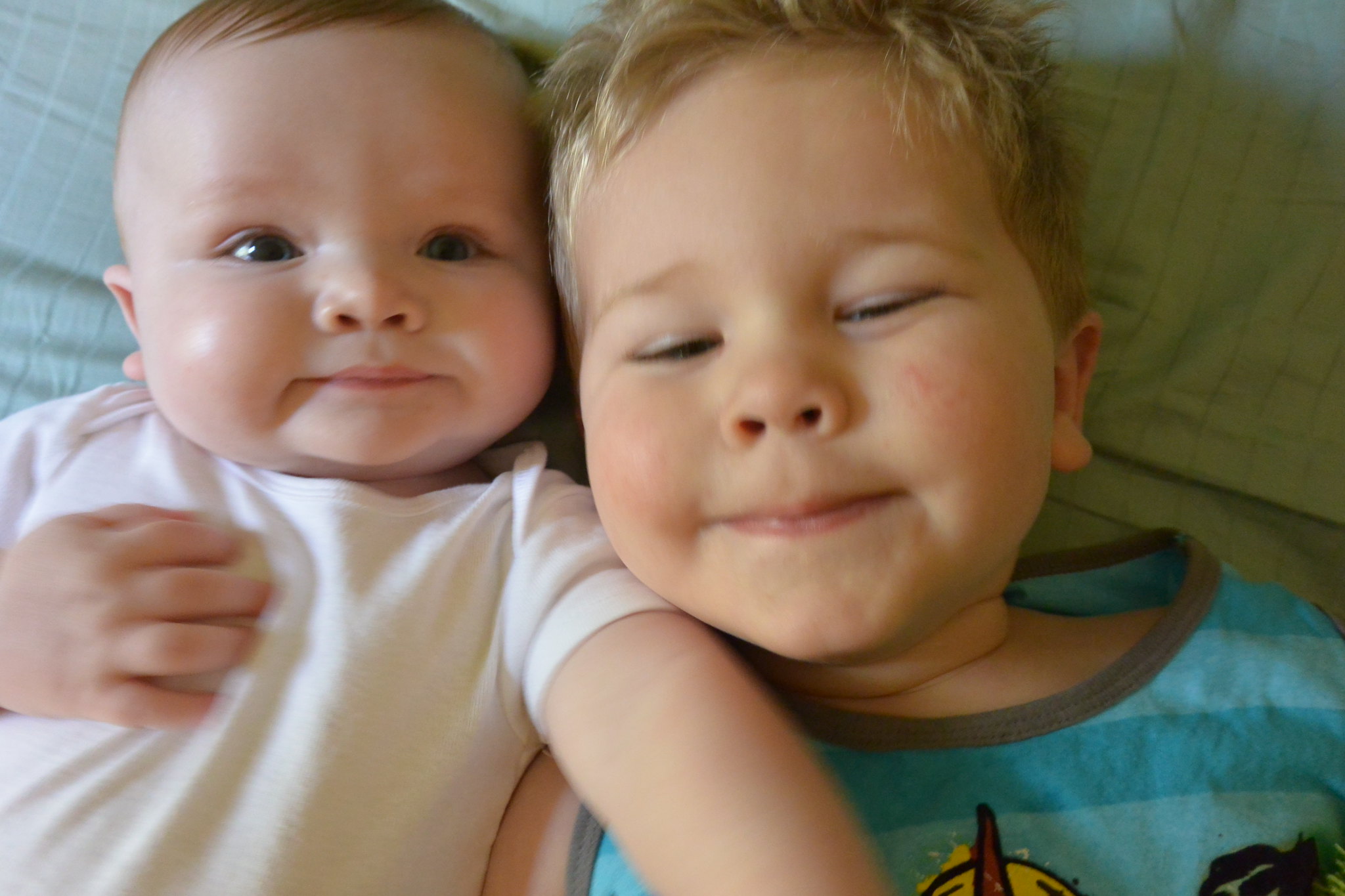 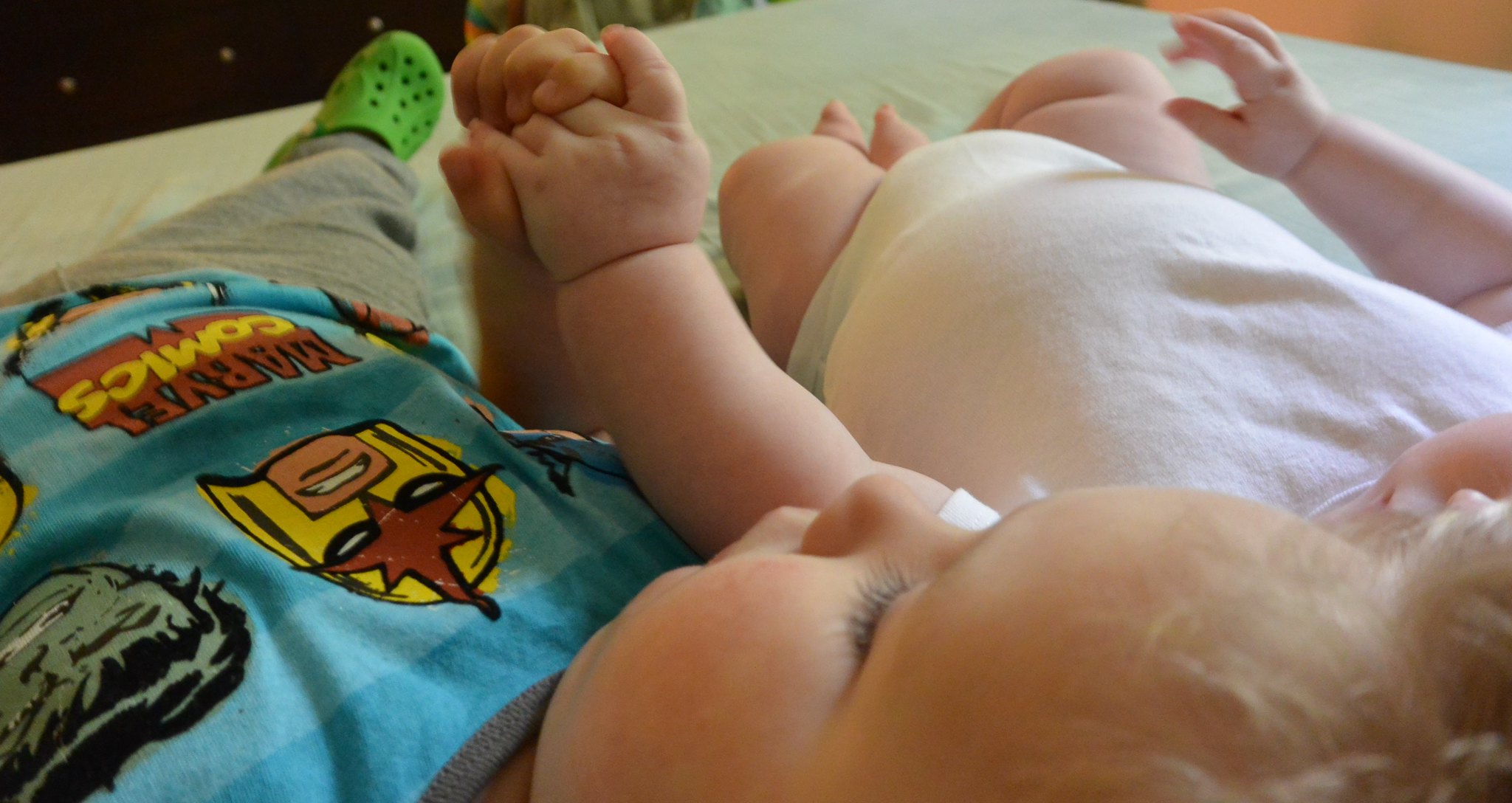 Snuggles with big brother while I attempted to take your monthly picture.
Already you guys interact and play together so much despite you being so little and unable to do much. I’ll be curious to see whether your relationship improves once you’re able to run around, talk etc… or if it will deteriorate because you’ll be able to snatch toys and argue! I’m sure it will be a bit of both, but hopefully more of the former. That phase will be here before we know it, as quick as you’re growing! 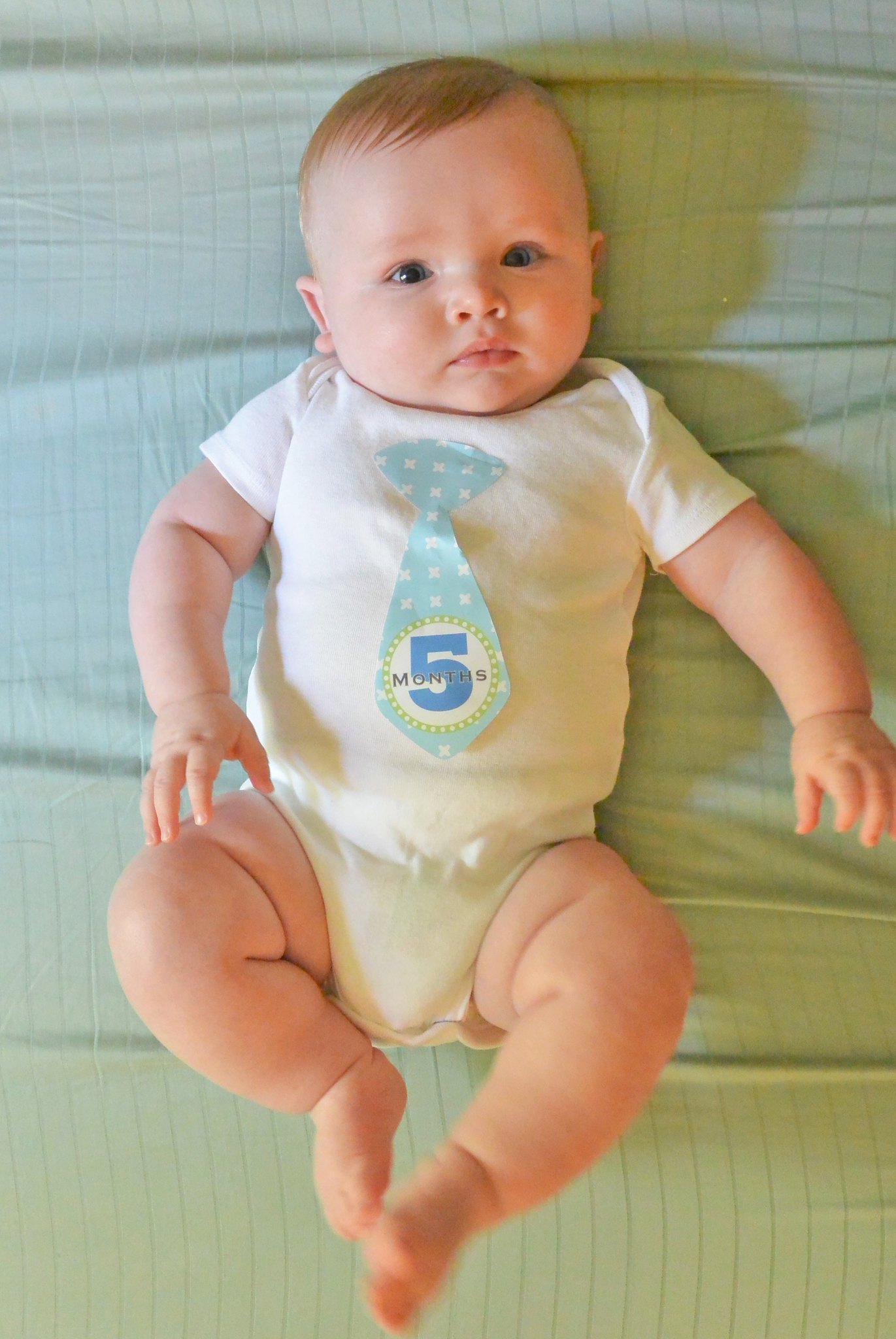