You are TWO! Of course I’m much later with this than I’d intended, so you’re actually well into two now. This second year really flew by, and it was really neat to see your rapid development occur over the course of that year. You went from not quite walking or talking… to RUNNING, jumping, talking in complete (albeit short) sentences and singing. You’ve learned most of your ABC’s, numbers up to 20, colors, shapes, animals, and so much more. Your personality has blossomed, too– you went from being a kid who takes at least half an hour to venture from my side at a playdate to a kid who yells “Hi, how you doing?!” to a stranger as we walk past them on the street. You have strong opinions and are getting better & better at expressing them. You like to help others and make people smile (you’re SUCH a clown!), give lots of hugs + kisses, and you’re quick to say sorry when you’ve done wrong or hurt someone. It has truly been such a joy watching you grow.

We didn’t do much on your actual birthday because it was so close to Charlie’s due date… we weren’t sure if I’d be in the hospital or not. Thankfully I was not, so we did at least take you out to a bounce house place, out to eat, and of course you have to have some cake on your birthday! 🙂

When you got that call from the Bubble Guppies in the morning, I don’t think you quite understood what it was. But you did ask for them to call again afterwards! It’s a good thing that we had you blow out birthday candles that night, because when we did your real birthday party a month later I forgot to bring a lighter to the party. :-\ So, you just pretended to blow the candles out instead. Lame I know, but the upside is that you basically ended up having two birthdays this year!

The month in between was largely uneventful… oh yeah, except for the little detail of you becoming a BIG BROTHER! 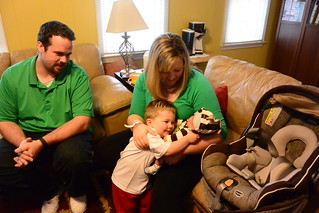 I think that picture more or less captures your reaction to Charlie’s arrival. 🙂 You’ve been a wonderful big brother so far, showering Charlie with hugs and kisses, helping me take care of him (although you have the attention span of a gnat at this age, so you only help in 10 to 30 second spurts), letting me know when Charlie is crying (“Mommy, Charlie’s hungry! Charlie dropped his paci!” Haha), and attempting to share your toys with him (and to my dismay, food/drinks as well). I have to watch you closely when you’re around him so that you don’t give him anything dangerous. 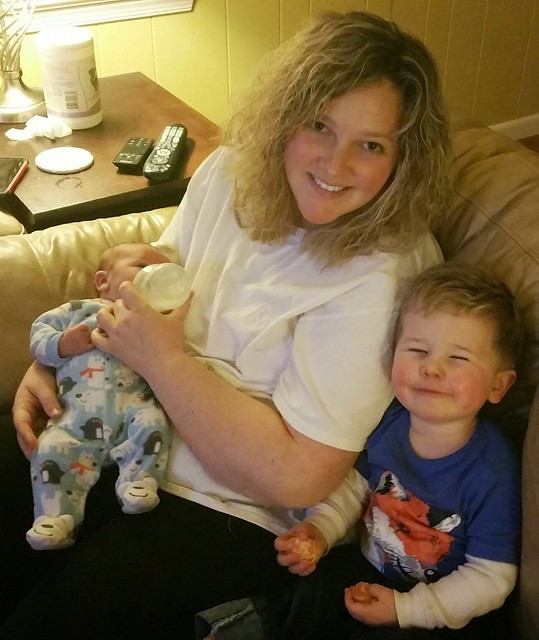 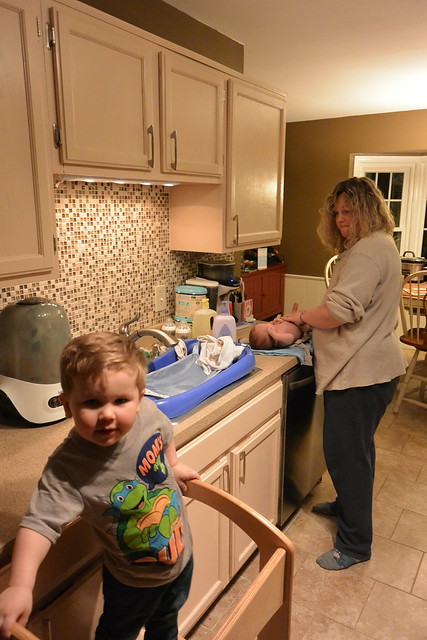 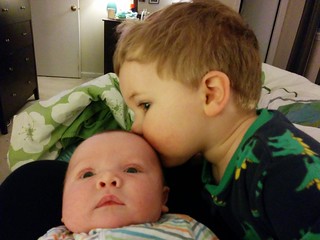 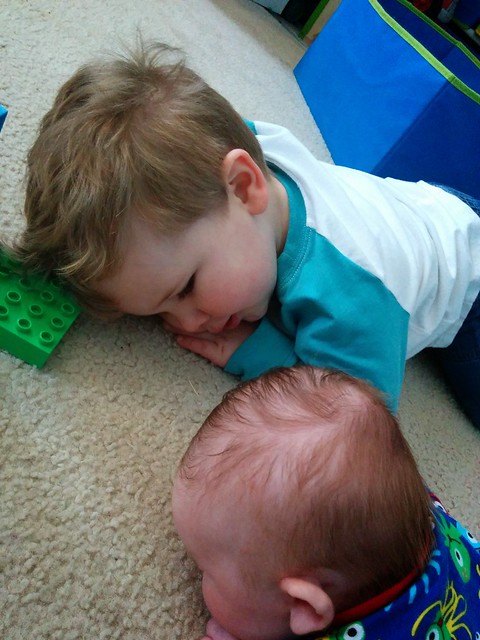 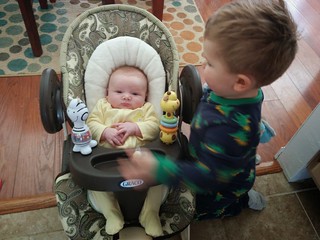 I think you’ll enjoy being a big brother even more once Charlie’s big enough to really play with you, but for now you’ve been very sweet and patient with him. Thank goodness. 😉

Between the new baby and the wintery weather, we’ve been stuck inside the house almost every day for the last couple of months. We’ve spent copious amounts of time playing with Play Doh, Legos and puzzles– those are your favorite things at the moment. You also really enjoy playing with stickers and occasionally painting or coloring with markers. I had to stop giving you crayons because you kept trying to eat them. :-\ Hide and seek is another big favorite around the house. Here’s some pictures and videos of the fun we’ve been up to the last few months: 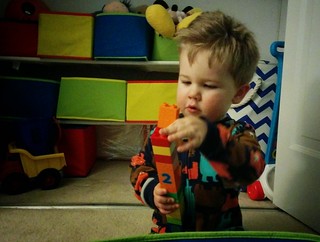 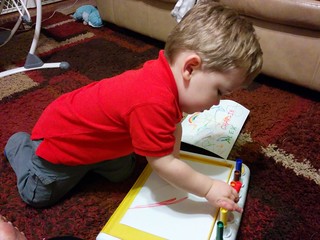 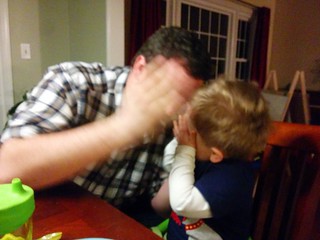 “Peeky-boo!” Almost every night after dinner we sit around the table doing silly things like playing peek-a-boo. Sometimes Dad shows you some “magic” by making things “disappear” from under your cup. You try to do the same, but it’s mostly you yelling “ta-da!” a lot. Haha. 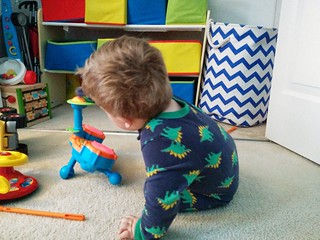 Playing the drums with your feet… Gosh, you’re so talented! 😉 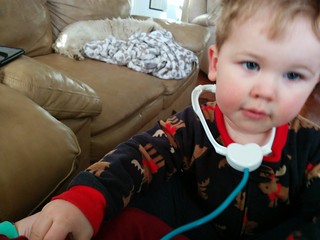 The doctor is in! You like to play pretend with your doctor set, your play kitchen, and a set of pretend hats you got for Christmas. 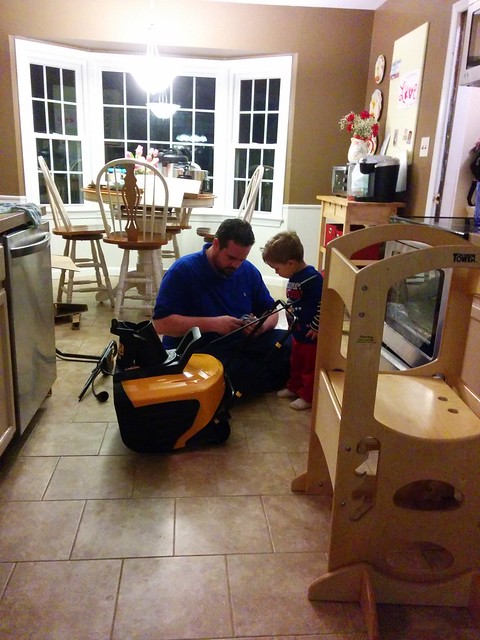 Helping Dad put together what you decided was “a robot” but is actually a snow blower. LOL. Speaking of snow…

Unfortunately the snow that day wasn’t sticky enough to build a snowman, so we had to settle for snow angels instead. 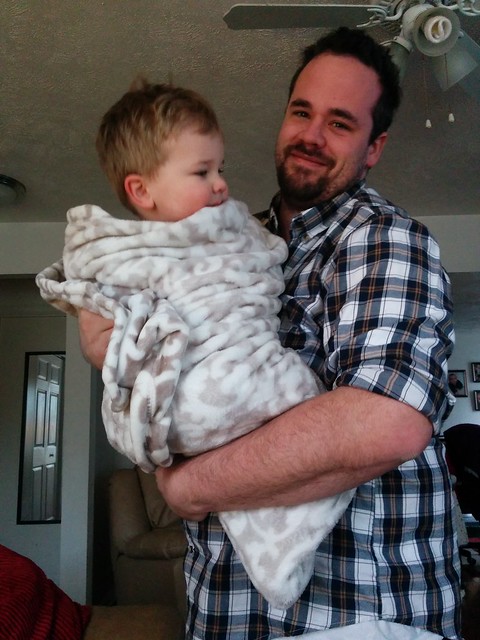 You really like being wrapped up in blankets lately. Not sure if it has something to do with seeing Charlie wrapped up a lot. On this particular day we were joking about you being a “BIIIIIIG baby!” 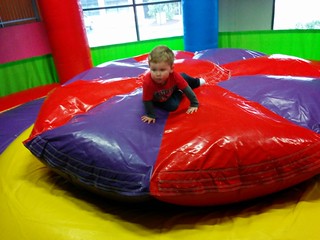 Enjoying the bounce house at a friend’s birthday party recently! This one actually wasn’t your favorite; you preferred the one that had a slide on it. However, I wasn’t able to get many pictures of you on that one because it was so tall that you needed help getting up there, & you’d sit on my lap sliding down. One of the best things about being a parent is getting to do fun kid stuff like that, which you don’t often get a chance to do as an adult without kids. 😉 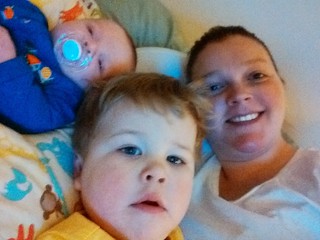 Relaxing in Mommy & Daddy’s bed on a snow day, watching TV. I’d be lying if I didn’t say that you watch your fair share of television… frankly I think it’s necessary when you are adjusting to life after adding a new baby to the family. Your favorite shows are Bubble Guppies, Daniel Tiger, Yo Gabba Gabba, and of course Sesame Street. You’re still Elmo-obsessed but have grown to love all the Sesame Street characters as well…

You’ll notice towards the end of that video a bit of the “terrible two” behavior coming out. It’s been occurring more & more lately. I guess you got the memo recently that you’re two now & you need to start acting like it. :-\ You’ve thrown tantrums/meltdowns over the most random things, like when you realized my galoshes wouldn’t fit you… 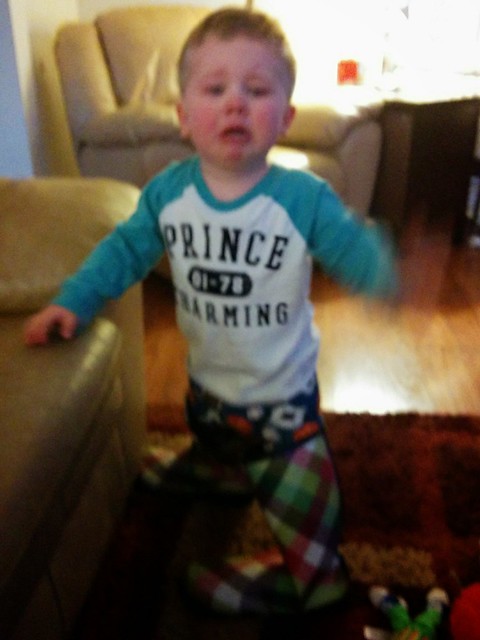 Or every morning when it’s time to take your pajamas off. Or when it’s too cold/wet to go outside & play. Or when you can’t have cookies for dinner. Or really pretty much any time we tell you “no.” :-\ Not that you are against the word in principle, because you love to say it yourself! You’ve also started to get bossy… words like “Mine!” and phrases like “Gimme that!” have entered your repertoire recently. But currently, the biggest challenge is hitting. You try to smack us when we tell you no. We’re working hard to nip that in the bud, but still have a long way to go unfortunately. Every day I pray for the patience, strength and grace to get through this phase of your life! 😉 Of course, it’s not all doom & gloom… this age is also a LOT of fun, and you can be ridiculously cute when you want to be. For example, just the other night after your fourth stint in time-out over the span of 30 minutes (for hitting me when you didn’t want to take a bath), I was kneeling down in front of you explaining why you were in time-out. Our faces were less than a foot apart. The conversation went something like this….

Mommy: “So Alex, you were in time-out because you hit Mommy. Hitting is not nice, and you really hurt me. It’s okay to be angry, but it’s NOT okay to hit people.”

Mommy: “Do you have anything to say for yourself?” [Note: this is usually the part where you say sorry & give me a hug.]

Oh man, it took everything in me not to laugh. I think you picked up on it though, because you did it several times before finally apologizing. Here are some other cute moments of yours from the last couple of months: 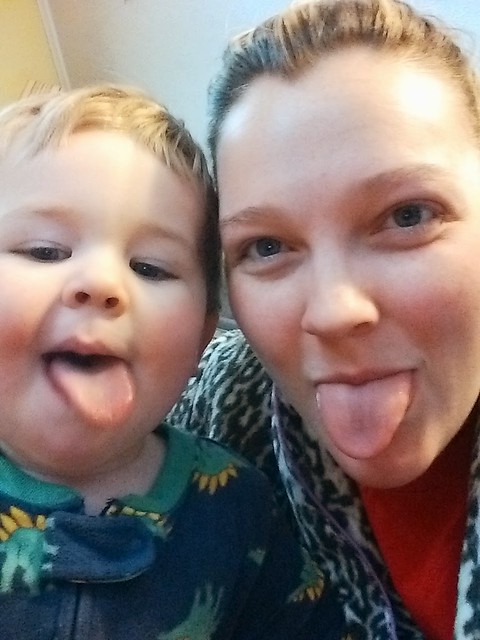 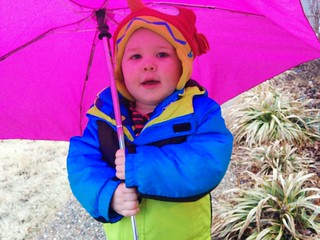 (This was adorable– we were hanging out in your room & you just randomly plopped down on the stool, faced me & started singing. What a little performer you are!) 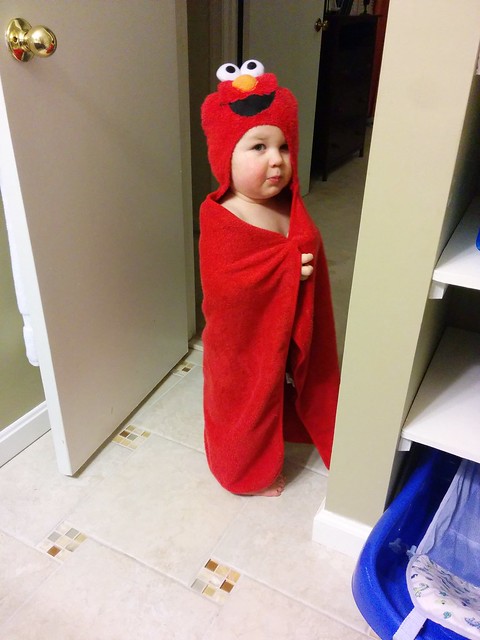 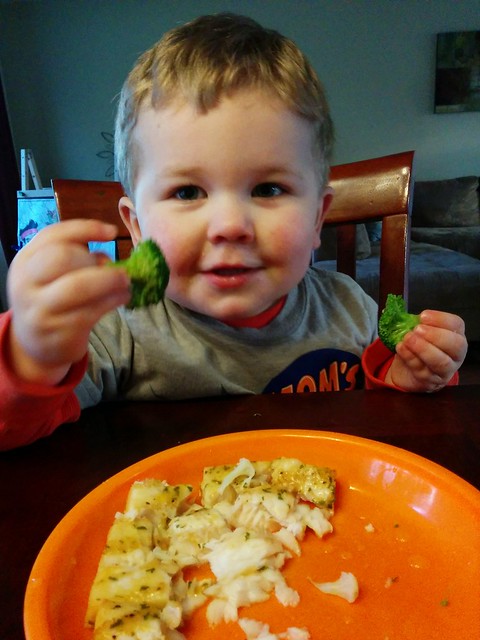 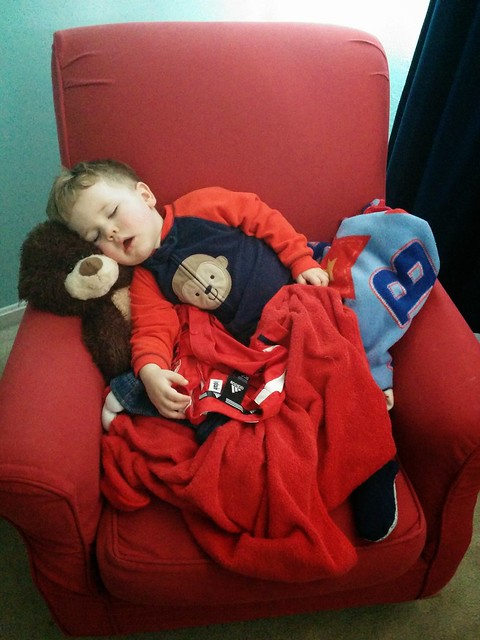 That last picture was taken after I discovered you’d climbed out of bed during your nap & fallen asleep in the chair. It was so cute that I couldn’t really be too mad about it. 😉 Actually, sleep has been an issue lately for you as well. Ironically I’ve been so tired all the time these last few weeks not because of Charlie (which is what most people would think), but because of you. You fight naps & bedtime HARD, taking at least an hour to finally fall asleep, sometimes skipping naps entirely, and often waking in the middle of the night for several hours at a time. Sometimes you just play in your bed quietly, but other times you wake up crying and I have to go in there and calm you down. My best guess is a combination of anxiety from the big changes in our family dynamic, nightmares, and a cough you’ve had that seems to bother you more often at night than during the day. It’s one of those things where I just keep telling myself “This too shall pass…” Although to be honest, prior to having kids I never imagined I’d still be dealing with this much sleep deprivation at 2 years old. It can be really tough, especially without grandparents around to help out & give us a break.

Luckily spring is just around the corner, and my hope is that more time to exercise outside will help burn some energy and help you sleep better. We have a lot of fun things planned for this spring & summer, with the play group as well as with friends & family… Dad & I can’t wait to experience them all with our two amazing little boys! 🙂