Happy 1 month birthday! I can’t believe a month has gone by already since you were born. I am celebrating by packing up your newborn-sized clothes (already!) and reflecting back on some of the things I’ve observed this past month as a first time parent:

I think that’s enough for now, although I’m sure if I sat here some more I could come up with many others… every day is a new adventure, and honestly I am learning just as much from you as you are from me. At this point I wouldn’t say that it has been FUN perse (there is a song by Darius Rucker called “It Won’t Be Like This For Long” that has become my mantra, haha)… but it has been rewarding. Sort of. And even when you’re being a HUGE pain in ass, which at this stage is most of the time….. Lord help me, I love you. 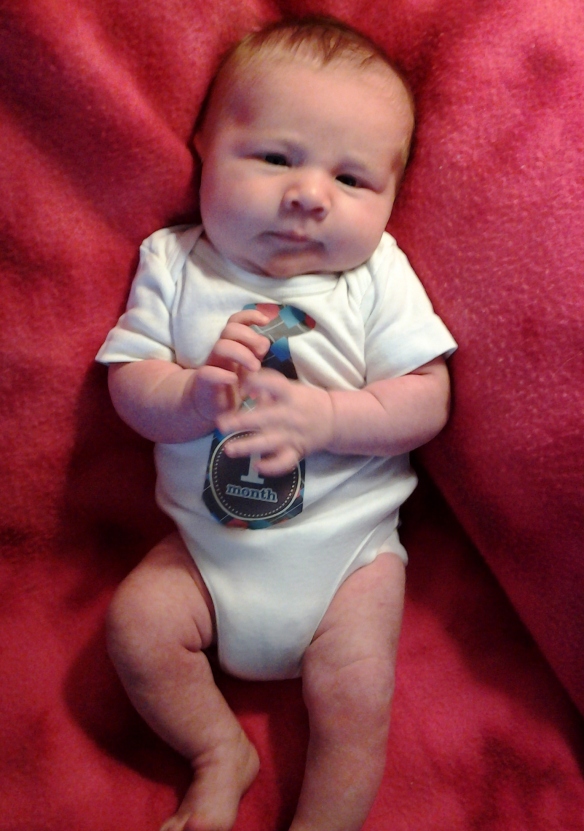 All my love (plus all my blood, sweat, tears and sanity),
Mom

You are just over 3 weeks old now, and I can’t believe how fast the time is flying by. It still feels to me at times like we just got home from the hospital… but other times, particularly when I think back on all we’ve been through these first few weeks, it feels like an eternity.

The first few days, both at the hospital & at home, were really rough. I was trying to exclusively breastfeed you, but with your birth being induced (plus the c-section), my milk was not coming in properly. We saw the lactation consultant in the hospital & tried everything she and the doctors suggested, but you were still losing weight too quickly and were clearly starving. It was pitiful & heartbreaking to watch, not to mention exhausting for all of us. Finally after the first 5 days or so, Dad & I made the decision to begin supplementing your diet with formula. Initially I beat myself up quite a bit about this, for several reasons… (1) there is a lot of pressure on women these days to breastfeed their babies (and for good reason of course, as breast milk truly is better for you than formula– but that does NOT mean that formula is BAD for you) and many feel “villanized” by others when they reveal that they are not breastfeeding, and (2) I felt like such a failure for being unable to do something that is supposedly so natural.

However, after seeing how quickly things turned around once we began using the formula I was able to make peace with the situation. You started putting on weight, sleeping longer and generally seeming like a happier baby. There is a saying that “if mom ain’t happy, nobody’s happy” … but I think when it comes to newborns it’s really “if baby ain’t happy, nobody’s happy!” LOL. Since then we’ve been working hard on figuring you out & establishing some sort of routine. The first couple of weeks both sets of grandparents took turns visiting, and they were a HUGE help. Seriously, thank God for grandparents. Especially since Dad came down with a cold not long after we got back from the hospital, so we had to limit his contact with you. I don’t know how I would’ve survived without the extra help!

This last week since all the visitors left we’ve been “in the deep end” of sorts since it’s just us now. We’ve had our good & bad days, but overall I think it could’ve been worse. I think pregnancy really did prepare me for the lack of sleep, but when it gets really bad Dad is able to relieve me for awhile. Still, I’ve decided to take the night shift since Dad has to get up early for work, and I want to work on establishing a really good nighttime routine with you. Dad takes over on the afternoons & weekends. I felt sorry for Dad that first day he had you all to himself… I think he underestimated how challenging it would be. Babies are a lot of work, and honestly sometimes my sanity wavers a bit, but you’re worth it! And I know it won’t be like this forever.

Anyway, other than all the crying your routine is eat, sleep & poop. Sometimes we have a few minutes where you’re both awake AND happy (still pretty rare at this point), and when we do we try to have a little bit of play time with you. We’ve been practicing “tummy time” to help your head & neck muscles develop… which were pretty strong already, you’ve been lifting your head quite a bit since you were born! 🙂 Other than that I haven’t noticed any milestones yet. You attempt to roll over & simulate crawling sometimes when you’re on the play mat, but you have a ways to go with that just yet. We haven’t seen many smiles from you yet either, and the few we have gotten are most likely gas-related (LOL). But they’re still so cute!

Speaking of cuteness, enough writing– picture time! First, we had a newborn photo session done & there are TONS of great pictures from that located here: http://s1169.beta.photobucket.com/user/laurapachec0/library/Alex%20Newborn%20Photos. Also, here are some pictures I’ve taken over these past few weeks:

Here you are at 1 week old! I plan to do another at 1 month, 2 months, and so on for the first year so we can see how much you grow & change.

All snuggled up in the baby carrier! I like wearing you around the house (SO much easier to get things done, especially when you’re being fussy) and also when we go out & about (less hassle than carrying you in the car seat).

Your first little play date! This is my friend Shannon’s daughter, Autumn, who was born about 6 weeks ahead of you.

Play time! You haven’t quite figured out the wrist rattles yet.

Tummy time! Usually when I put you belly down on this pillow, you end up falling asleep.

Tiny little fingers! You love to hold our hands, especially while we’re feeding you. You have a strong grip!

More play time! Cody is joining in on the fun. He loves hanging out with you & giving you “kisses” 😉

All bundled up for your 2 week check-up with the pediatrician! We were joking that you remind us of the kid from A Christmas Story– “I can’t put my arms down!” LOL

Posing for the camera!

Father-son conversation. 😀 I love pictures of you & Dad together… he hates taking pictures & before you were born it was very hard to get a picture of him looking genuinely happy. But in every picture with the two of you, the happiness shines through! So sweet!

That’s about it for now. I started writing this on Sunday & it is now Tuesday… very hard to find time to write these days. I probably won’t write again for awhile until something more interesting comes up, for now it’s just the same eat-sleep-poop routine!