15 weeks along today… I can’t believe that in just a little over a month we’ll be finding out if you’re a boy or a girl! Dad & I can’t wait. 😀 So much of the planning/preparing happens after that point that we are really looking forward to: decorating your nursery, putting together a registry, finalizing a name choice (we have changed our minds on top name choices since I last wrote about them, which I thought would happen), etc. etc. BUT that doesn’t mean that there aren’t things to be doing now! Dad & I spent this past weekend working on another important part of your nursery– the closet. Actually, it had been Dad’s closet up until now because I had so much stuff that I took up the whole closet in our bedroom (whoops!). So we both went through all our things and did some re-organizing, and now we can finally share a closet for the first time in the history of our relationship. For the moment we are leaving the closet in your nursery the way it is, until we have more of your things and now what kind of storage/organization system we’re going to need… but at least the closet is 100% yours now!

We’ve also been doing some research and making a few purchases related to diapers. Specifically, Dad & I have decided to go the cloth diaper route with you as much as possible, which is not only better for you & the environment but will save us a ton of money as well in the long-run. We’re springing for the kind that are meant to work almost exactly like disposable diapers, which are more expensive but we think it will be worth it. The choice to use cloth diapers is apparently a controversial decision based on some people’s reactions when I’ve told them about it, but Dad & I really do think this is the best choice for our family and are committed to making it work. I ordered our first dozen online today & am really excited about it!

The other big thing that went on since I last wrote you is, of course, my monthly checkup with the OB-GYN. Everything went really well! My blood pressure was normal and overall I’ve only gained 1 pound so far. My doctor said she is really happy with how well I’ve been keeping my weight in check. She also went over the nuchal translucency test results (blood & ultrasound) in more detail, and all of that looked really good as well. Next she took out the doppler & we listened to your heartbeat for a few minutes. It was around 150 beats per minute which the doctor said was perfect, and we could also hear you moving around in there. We could hear the “woosh woosh woosh” of the heartbeat followed by a big “POW!” every couple of seconds when you would kick or punch. You were very active, my little kung fu baby! 😀 It was so neat; I wish Dad could’ve been there to hear it (he had to work). The doctor said that I probably won’t start to actually feel kicks/punches until around 20 weeks or so, and that between now & then it will probably just feel like gas. Haha. And that was pretty much it. The doctor said she is really pleased & excited about how well I’ve been doing, and to keep up the good work. 😉 I have to go back at 16 weeks to do the glucose test for gestational diabetes, 18 weeks for my regular check up, then 20 weeks for the anatomy scan… so basically every 2 weeks for awhile. But I don’t mind… I’m actually glad my doctor is keeping a close eye on things. I’m a little worried about the diabetes test since I’m overweight & therefore more prone to things like that, but hopefully it will come out alright!

As far as how I’m looking/feeling this week, it’s really pretty much the same as last week. My energy is still not quite 100% but much better than it was during the first trimester. Nausea is almost nonexistent, and the only pains I feel are normal “growing pains” from time to time, which I discussed last week. Size-wise I’m still in this weird in-between phase where my normal clothes are kind of tight, but I’m not quite big enough for maternity pants yet. Luckily the set of maternity clothes I got off of Craigslist included some stretchy band pants for just this scenario, and I’m loving them! Anyway, overall I didn’t really notice much growth this week: 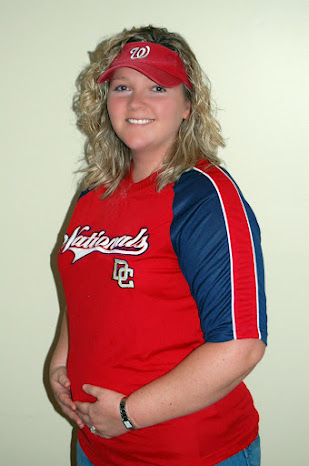 This was taken at exactly the 15 week mark on Saturday, just as we were about to head out to a Nats game (hence my choice of attire). I noticed at the game that I can’t really sit leaning forward much anymore without feeling some major discomfort (I sometimes do that at games because those seats are so squished together & I just need some space between me & the next person). I guess it makes sense, considering my sources say you are now the size of a navel orange. CRAZY, but awesome! We are so proud of you already– you’ve been growing & developing right on target thus far, and every time we’ve seen you you’re either swimming around like Michael Phelps or kicking/punching like Bruce Lee, haha… what a champ! Dad & I couldn’t be happier! We can’t wait to see you again next month, who knows what you’ll be up to by then. 😉

I’d better wrap this up, another long ramble-y letter but I don’t want to forget any of this. And more importantly, I want you to know someday about how Dad & I have loved every minute and every detail of this experience, creating this little life we’re all sharing… how much WE LOVE YOU already, and have from the moment we knew you were on your way!